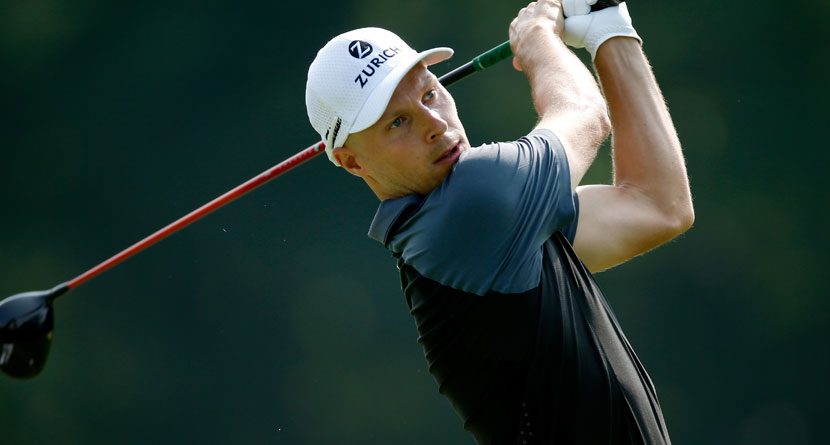 We’re halfway through the FedExCup playoffs, and the 70-player field for the BMW Championship is set (barring any withdrawals). As with every leg of the playoffs, there were a handful of players who played their way into the next round, making big jumps up the standings.

Here are some of the biggest movers from the Deutsche Bank Championship:

Chris Kirk
Not necessarily the biggest mover this week, but certainly one of the most important, was Chris Kirk. The former Georgia Bulldog fired a final-round 66 Monday while many others at the top of the leaderboard faltered. Kirk jumped from 17th to first in the FedExCup standings, unseating Hunter Mahan at the top.

Geoff Ogilvy
Geoff Ogilvy made the largest move in the standings. Closing rounds of 65 helped the Australian jump 76 spots to number 24. Not only did he move into the top 70, but he’ll go into the BMW Championship in the top 25, as it’s in his control to secure a spot in the top 30 for the Tour Championship. Billy Horschel
Billy Horschel came to the 18th hole needing a birdie to tie Kirk, but his second shot on the par-5 found the hazard, essentially ending his hopes of a victory. But it wasn’t all bad for Horschel. His t-2 finish bumped him 62 spots in the FedExCup standings as he went from 82 to 20. His bogey on the final hole may have overshadowed his play this week, but four rounds under 70 is some solid golf.

Russell Henley
Another Georgia alumnus was a big mover in the second round of the playoffs, and that was Russell Henley. Henley finished the Deutsche Bank Championship with bookend rounds of 70, but it was second and third rounds of 66 and 65, respectively, that helped him move up the standings. He began the week at No. 62, and with his solid play, jumped 48 spots to No. 14.

Ben Crane
Ben Crane didn’t have the strongest showing at TPC Boston, but it was enough to survive. He was on the outside looking in to begin the week, but he finished t-29 to move his name up from 78 to 69 in the standings. He’ll need a strong showing at the BMW Championship to move his name into the top 30.