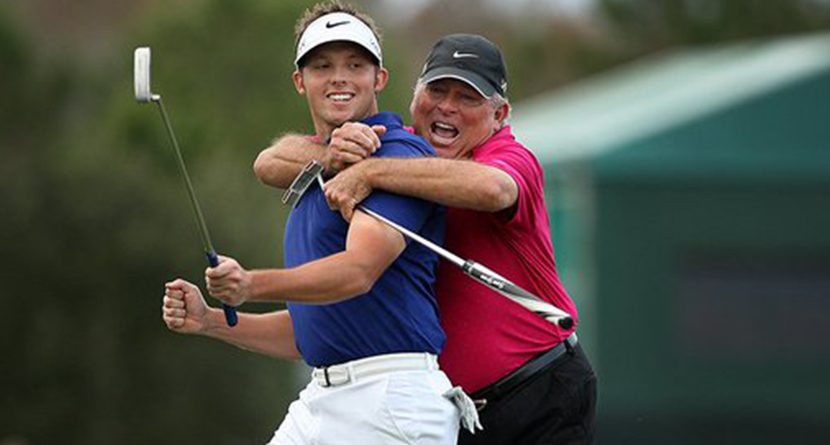 Lanny Wadkins, the 1977 PGA Champion, and his 23-year-old son, Tucker, emerged victorious from a four-team, eight-man playoff to win the PNC Father/Son Challenge on Sunday in Orlando, Fla. at the Ritz-Carlton Golf Club.

Playing in the 36-hole scramble event for the ninth time (the fourth with Tucker), Team Wadkins had never finished better than ninth, but rounds of 61-63 — capped off by a Lanny birdie putt on the 18th hole — got the Wadkins into a four-team playoff along with Davis and Dru Love, Fred and Taylor Funk and Larry and Drew Nelson.

On the first playoff hole, Tucker drained a 40-footer for eagle that proved to be the winning putt when the Loves were unable to convert their putts for 3.

Tucker is a former University of Arizona golfer who currently works at a Dallas investor relations firm and his father has been relegated to the television booth after back problems derailed his senior circuit career.

The Wadkins walked away with a $200,000 payday and role of defending champions in next year’s event.

This year’s Father/Son Challenge was the 19th installment and fourth since the revamp in 2012, which ended a four-year hiatus.