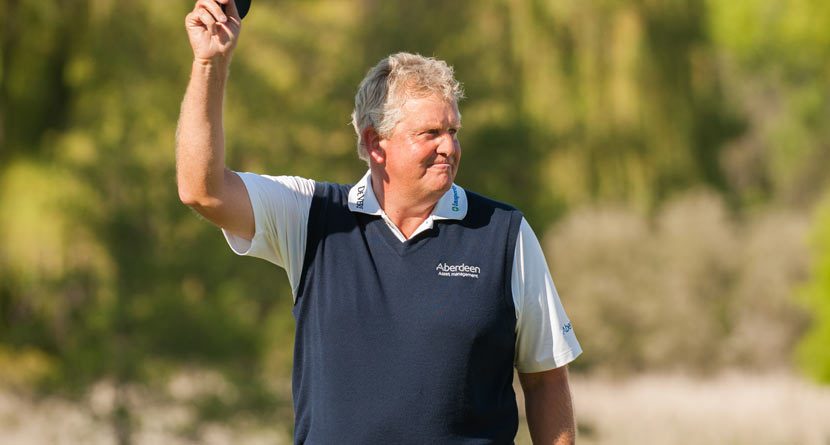 Every sport has its hall of fame player who never quite achieved the ultimate goal.

Football has Dan Marino, who played 17 seasons and set dozens of passing records but never won the Super Bowl. Baseball has Ken Griffey Jr., the greatest player of the steroid era not to be linked to performance-enhancing drugs, who hit 630 home runs in 22 years but never even played in a World Series. NASCAR has Mark Martin, who has won 40 Sprint Cup Series races and finished second in points five times, but has never been crowned a champion.

Since 1988, Montgomerie has racked up 43 wins as a pro. His 31 on the European Tour are good for the fourth most in the tour’s history, behind Seve Ballesteros, Bernhard Langer and Tiger Woods. For an unprecedented seven straight years, from 1993 t0 1999, he was the tour’s Order of Merit winner. Despite having one of the most impressive careers in recent memory, Montgomerie has been shut out in major championships. Five times, twice in a playoff, the Scotsman has finished runner-up.

His last chance at a major may come next week at the PGA Championship.

Montgomerie’s near misses are famous. He finished second to Woods at the Open Championship in 2005, lost the 1995 PGA Championship in a playoff to Steve Elkington, and has three times been runner-up at the U.S. Open.

In fact, one could argue that the only player to suffer more U.S. Open heartbreak than Monty is Phil Mickelson. However, Mickelson has five major titles to help him sleep at night. Montgomerie does not.

In the 1994 U.S. Open, Montgomerie fell in a playoff to Ernie Els at Oakmont. Three years later, Monty would again fall to Els in America’s championship, losing by one stroke at Congressional.

The most disheartening loss of his career came in 2006 at Winged Foot. Montgomerie had the best chance of his career to win a major as he stood in the 18th fairway on Sunday. Expecting adrenaline to kick in, he clubbed down and hit a poor second shot. His third shot wasn’t great, either. Montgomerie would go on to make six after three-putting from 30 feet.

After the loss, his third and final runner-up in a U.S. Open, Montgomerie famously said, “At my age I’ve got to think positively. I’m 43 next week, and it’s nice I can come back to this tournament and do well again, and I look forward to coming back here again next year and trying another U.S. Open disaster.”

Monty hasn’t played in a major on the primary tours since 2010, but is looking forward to what will perhaps be his final shot at major glory at Valhalla next week. Since joining the Champions Tour he has claimed two majors: the 2014 U.S. Senior Open and Senior PGA Championship, the latter getting him into this year’s PGA Championship.

And why not Monty at Valhalla? Sure, he’s getting 300/1 money from Vegas right now, but he’s one of the hottest players on the Champions Tour and, in recent years, that seems to count for more than it ever had before. Monty is only 51. If Tom Watson (2009) and Greg Norman (2008) can lead Open Championships on Sunday, and Fred Couples (2010), Miguel Angel Jimenez (2014) and Bernhard Langer (2014) can score top-10 finishes in the Masters, then why can’t Montgomerie make history at Valhalla?

“Yes it’s a long course, but at the same time the emphasis there will be hitting the fairways and greens,” Montgomerie told the Guardian. “If I can hit 17 greens in regulation around Harbour Shores, like I did in that last round of 65, I can compete at that level again. I will do my utmost to put up a good showing as a Senior PGA champion.”

Montgomerie isn’t the only one who thinks he’s got a chance. Watson, one of the men he beat at this year’s Senior PGA Championship, believes in Monty’s game.

“Colin has the type of game that if you play major championships on firm greens, tight pin positions, he’s got the type of swing to do that and make it work,” Watson said. “He never had any luck when he was playing the regular tour, but he certainly came close a bunch of times.”

For Montgomerie, perhaps his 72nd time playing a major will be the charm.