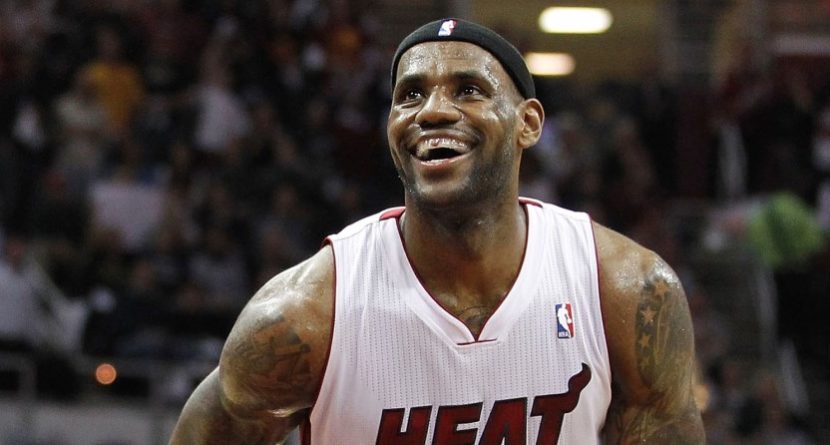 NBA superstar LeBron James took 33 shots Monday night, made 22 of them, of which eight were 3-pointers, and finished with 61 points. That highly-efficient night marked a new career high in points for the game’s best player.

“It felt like I had a golf ball, throwing it into the ocean,” he said.

Coincidentally, that 61 matches the career best of another ultra-famous athlete with whom LeBron actually shares a birthday: Tiger Woods (they were both born Dec. 30). The world’s best golfer most recently shot 61 last August at the Bridgestone Invitational, when he went 9-under-par in the second round en route to his fifth victory of the season.

While 61 is far from the most points scored in an NBA game (Wilt Chamberlain notched 100 in 1962), the score is very close to golf’s record of 59. Six players have accomplished that feat on the PGA Tour.

– Another memorable golf 61 was turned in by Rory McIlroy, who recorded the score as a 16-year-old in 2005.

– Of course, the most famous 61 is baseball’s home run record, which was set by Roger Maris in 1961 and stood for 37 years. Many purists still regard that number as the most home runs ever hit in a season, as the three men who have since topped that mark (Barry Bonds, Mark McGwire, Sammy Sosa) have all been linked to performance-enhancing drugs.

– Elsewhere in baseball, two of the greatest pitchers ever, Nolan Ryan and Tom Seaver, each recorded 61 career shutouts.

– In basketball, Elgin Baylor set a NBA Finals record by scoring 61 points in a game in 1962, a mark that still stands.

– In football, Justin Tucker kicked the longest indoor field goal in NFL history from 61 yards out in December, a game-winner that was his sixth FG of the night.

– And in hockey, the Great One, Wayne Gretzky, holds or shares 61 NHL records.

Related Links: LeBron James’ Golf Swing Not as Pretty as his Jumper