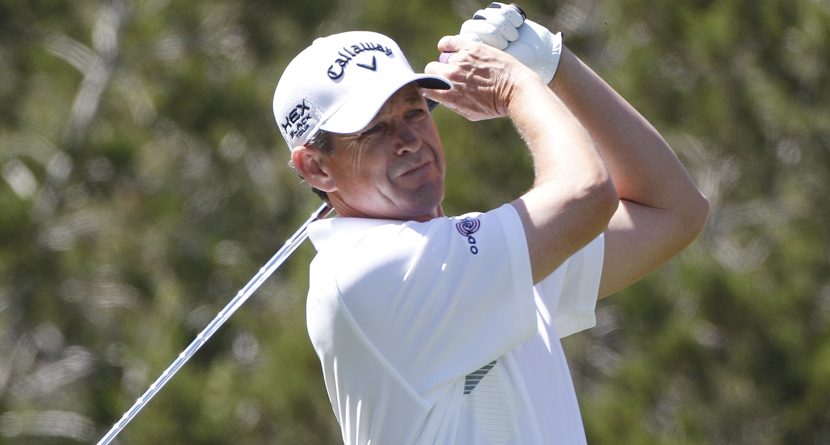 We spoke, and Lee Janzen listened.

Included in a recent story that outlined five things we wish to bring back from the old days of golf was metal spikes.

Janzen, a two-time U.S. Open champion (1993, 1998), tried to qualify for the 2013 event at Woodmont Country Club in Rockville, Md. the other day. He shot a 75 in his first of two rounds, but was then disqualified for breaking the rules.

He was wearing metal spikes.

It was apparently in a letter mailed to every player trying to qualify for the U.S. Open that metal spikes were banned at all but two qualifying sites — in Columbus, Ohio and Memphis, Tenn., where many PGA Tour pros were trying to earn a berth. Wearing metal spikes, despite being a major no-no at every golf course in the U.S. (at least to our knowledge), are still allowed on the Tour.

Michael Cumberpatch, the official at the Mid-Atlantic Golf Association who was in charge of the qualifier at Woodmont, had some rather blunt words about Janzen’s spikes flap during an interview with Golf Channel.

“The only confusion would be you didn’t read the documentation you’re required to read,” he said. “You’re responsible for knowing the conditions under which you’re playing.”

We found this photo from the Getty Images archives of Hale Irwin and Lee Janzen cleaning grass and dirt out of their metal spikes during the 1996 Templeton Shark Shootout. Remember those days? Spikes-gate aside, doesn’t it seem wrong to require a former U.S. Open winner (or in this case a two-time winner) to qualify to play in the tournament? We get that the U.S. Open is a showcase of the best players on the Tour and in the U.S. And the winners over the previous 10 years are invited back.

But it just feels wrong that a former winner is forced to play his way in.