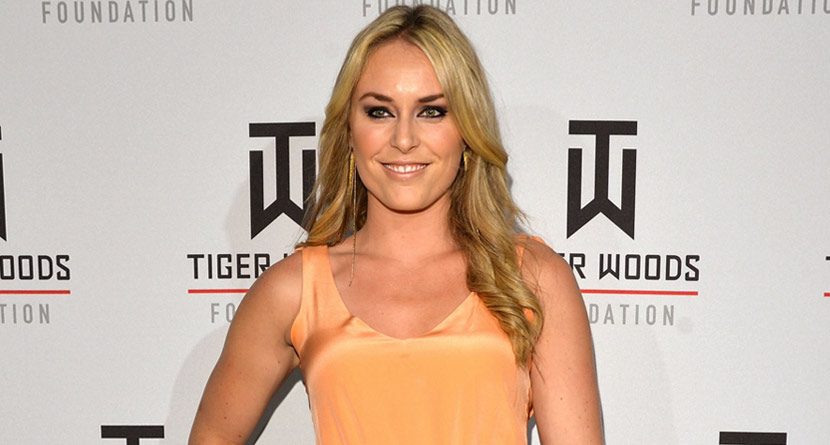 Thanks to Tiger Woods, more people know Lindsey Vonn than ever before.

That says nothing about Lindsey’s own abundant talent, fame or accomplishments. She just happens to be dating the most popular boy at school. So while Lindsey can tell the New York Times she’s not “just Tiger’s girlfriend,” when you’re in a relationship with one of the most powerful athletes in the world, who can pick you up on his private jet at a moment’s notice after you’re hurt on the slopes, you’re no longer just Lindsey Vonn, Olympic skier. I met Tiger at the U.S. Open this year. He was on the putting green and kicked one of his balls over to a group of young kids who dove over each other trying to get to it. Before he left, he shook my hand and walked toward the driving range.

Afterward, when I was sitting in the stands, a man tapped me on the shoulder:

“Was that you who just shook Tiger’s hand?”

The woman next to him: “Can I get a picture?”

See, that’s famous — when Tiger interacts with someone and that person gets recognized just for meeting him.

I’m going to call it “The Tiger Woods Effect,” and it’s something Lindsey has been experiencing since the two announced their relationship over Facebook in March.

Since then, we’ve seen Lindsey at most of Tiger’s golf tournaments (she was unable to make it to the PGA Championship this past week due to ski training), loyally following him at practice rounds, and supporting him during play from behind the ropes. And while seeing Tiger in a happy relationship again makes nearly everyone associated with him, including his sponsors, feel comfortable, it’s what Tiger can do for Lindsey that may be more profound.

On her own, Lindsey is an exceptionally-talented athlete. As an Olympic gold medalist, she’s accomplished a great deal in her 28 years. Part of what has set her apart is her beauty (a la the swimsuit photo shoot she did for Sports Illustrated in 2010) and her attitude. When she talks to the press about her relationship with Tiger, you get the sense that this is any normal girl being thrown into an extremely abnormal situation. The deluge of fame, the intrusion of the cameras, the shock of people being so interested in her personal life — it makes you think, “Yeah, this is how I would probably handle it.” While she’s adjusting to this new-found popularity, Lindsey can think of it this way: More eyes will be on her than ever before in her career once she hits the slopes again next month in Chile.  And it’s not just because she’s making her return to skiing for the first time since her injury.

Immediately after Tiger and Lindsey made it official on Facebook, the announcement received 17,000 likes, 2,000 shares and 4,800 comments. According to Google Trends, Vonn’s online popularity spiked significantly in April, with the majority of online chatter surrounding Vonn’s relationship with Tiger. It was her highest spike in online traffic since she became the first American female to win Olympic gold in the downhill in 2010.

Even though it’s unlikely that Tiger will become known as “Lindsey’s boyfriend” once her season starts and she gets back on the skis this winter to prepare for the 2014 Winter Olympics, Lindsey can take it for what it’s worth. Being Tiger Woods’ other half is just another reason to be a Lindsey Vonn fan, an another opportunity for people to admire her the same way Tiger does and her original fans always have.

Other Hot Links:
– Jason Dufner Joins Growing List of First-Time Major Winners
– Who Is Baba Booey and Why Do Golf Fans Yell That Name?
– Studs & Duds from PGA Championship