Lipping Out:~When To Be Upset 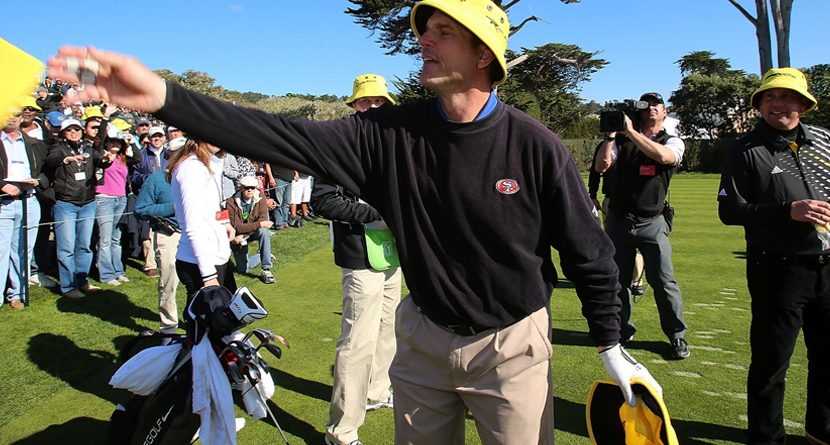 “No, I’m not good enough to get upset about it.” – San Francisco 49ers head coach Jim Harbaugh finding some much needed relief in his mediocre golf game. “Did I hit you? It was a bad shot. I’m really sorry.” – Former Sec of State Condoleezza Rice after hitting a spectator during the first round of the Pebble Beach Pro-Am. “Sure, yes I do. Well, there were times when nothing was acceptable, and that somehow, what we were doing was a distraction. And now it’s embraced. It’s kind of funny, you get to laugh at that a little bit.” – Bill Murray reminiscing about a time when he wasn’t always embraced by the Monterey Peninsula. “I’m going to end up missing the Match Play this year as we’re going to go on a family trip.” – Phil Mickelson with his stock excuse for bowing out of the WGC-Accenture Match Play championship. “I find it very relaxing, just the weather and getting up in the morning and not having to look out the window and just throw on a pair of shorts and a T-shirt and go. It’s almost too easy.” – Lee Westwood on one of the finer conveniences of becoming a Florida resident. “Our anti-doping policy sets forth a review process for matters such as this. We are in the midst of that review process. And we really can’t comment on how it’s going, how long it’s going to go, until the pendency is over.” – Ty Votaw, executive vice president of the PGA Tour, commenting on Vijay Singh’s status following a meeting the 49-year-old Tour vet had with Tim Finchem last week at Pebble Beach. “I’ve been working around it and it’s been a nagging thing for a long time. The last three months, it’s been more than a nagging thing. It’s just been a constant annoyance and needs to be fixed.” – Former Ryder Cup captain Davis Love III on his neck surgery that will keep him out of action for at least 6-8 weeks.