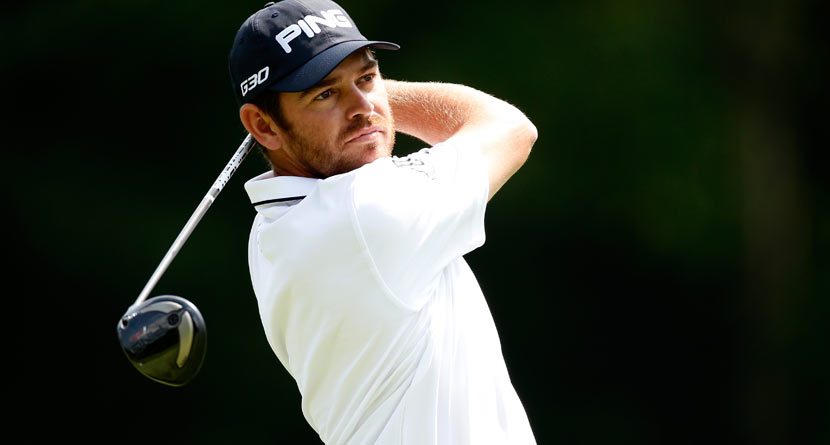 Players took a break from their all-important practice rounds to have a little fun on Tuesday. The Long-Drive Contest returned to the PGA Championship for the first time in 30 years and, as you might expect,  it was a very big hit.

Up for grabs was $25,000 to be split between two charities for the winner and money clips — inspired by the ones given away during the 1963 PGA Championship’s long-drive contest won by Jack Nicklaus — for the top three finishers. The Golden Bear loved his clip from 1963 so much that he still uses it today. Here’s a look at it, and the prize the tour’s best bombers were vying for on Tuesday:

#PGALongDrive winner will receive a very similar money clip to the one @jacknicklaus still carries from 1963. pic.twitter.com/Qa2Qvhfnsl

At the end of the day, Louis Oosthuizen out-bombed all the game’s big hitters, winning the contest with a ringing 340-yard drive at Valhalla’s 590-yard par-5 10th. Jason Day (338) finished runner-up. Of note: Oosthuizen’s winning drive was still not enough to catch Nicklaus’ winning drive of 341 yards, 17 inches in 1963.

Adam Scott was the first one off this morning — and the first to throw his name into the hat for this year’s long-drive contest. The current world No. 2 piped it 320 and was the early leader in the clubhouse.:

First off at the Long Drive Competition – Mr. Adam Scott. Hit it 320 yards and he’s the leader in the clubhouse. pic.twitter.com/pgrkF569tf

John Daly may not have won the long-drive contest, but he was the fan favorite. The 1991 PGA Champion bombed one 314 but failed to remain on the leaderboard as the day progressed.

Midway through the morning, Keegan Bradley stepped up and put his name near the top of the leaderboard with a 326-yard bomb …

.@Keegan_Bradley threw his hat in the ring with a 326 yard drive at the @PGAChampionship Long Drive contest. pic.twitter.com/r4CRbtI1UR

… but it wasn’t enough to top his friend, Rickie Fowler, who unleashed a 328-yard bullet:

Henrik Stenson’s drive may have failed to cross over the 320-yard threshold, but that doesn’t mean it’s not fun to watch him grip it and rip it:

Phil Mickelson tried to put himself on top of the leaderboard, but got a little wild and missed the fairway, eliminating him from contention:

Jason Day spent much of the day atop the leaderboard. Here he is ripping his driver on 10 to the tune of 338 yards:

Sadly, Rory McIlroy joined Phil Mickelson and Justin Rose in the group of guys who couldn’t find the short grass. Padraig Harrington is also on that list — but he hit his tee ball “Happy Gilmore” style, so you really can’t blame him for missing the fairway.

Louis Oosthuizen will get a chance to duplicate the drive on Thursday at 9:05 am when he, Justin Rose and Matt Kuchar get their PGA Championship underway.