Lucy Li: Not Your Average 11-Year-Old 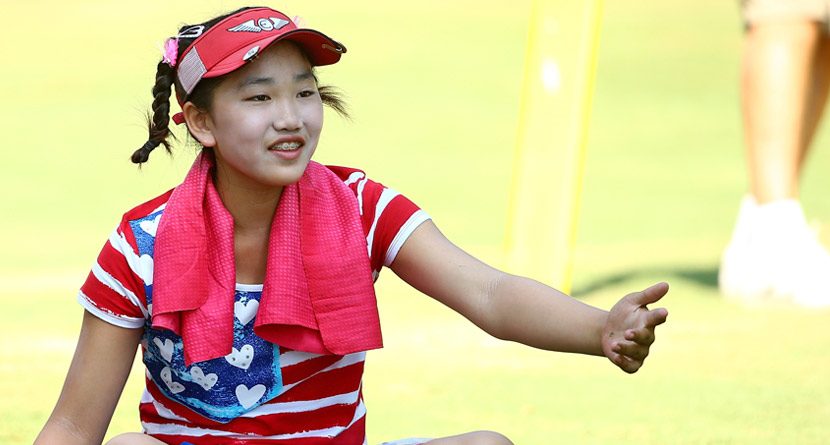 In light of Lucy Li’s U.S. Open appearance, I can’t help but think back to my 11-year-old self and feel slightly inadequate. At just 11, Lucy Li is the youngest player ever to qualify for the U.S. Women’s Open.

As the tournament officially kicked off Thursday, a composed Li said in a giggly press conference, “I just want to go out there and have fun and play the best I can, and I really don’t care about the outcome.” I’m in total awe of her poise and maturity as she tees off with LPGA pros twice her age.

How does 11 year old Lucy Li celebrate her 1st round @usopengolf ?? With a pink Popsicle. Li shoots 78 & happy! pic.twitter.com/MbR3XRKqc7

Roughly 10 years ago, I was 11 years old, just like Li, and the school year was coming to an end. I spent the whole summer of 2004 worrying about starting middle school and desperately trying to transform my elementary school look.

Summers back then were free of responsibilities, other than soccer camps and summer reading books. Summer reading was the bane of nearly every 11-year-old’s existence (except Li’s, apparently, as USA Today says she reads 400-page books in just two days). That summer, I ditched my glasses for contacts, but got a brand new set of braces. Life was good but … awkward.

On the contrary, my girl Lucy Li’s summer begins at Pinehurst No. 2! I think it’s safe to say Li’s not your average 11- year-old girl and there’s nothing awkward about this middle schooler. She’s determined, hardworking and has an Augusta National Drive, Chip and Putt victory under her sparkly-pink belt. For starters, Li is home-schooled and trains all year round with her coach, Jim McLean, in Miami. Her family relocated from Hong Kong to California and she began training at the age of 7.  I won’t even begin to tell you what I was doing when I was 7, but it did have nearly everything to do with Barbies.

One thing Li and my younger self do have in common: We both looked up to our big brothers. PGA.com says that Li’s mother tried to get her involved with music, ballet and aerobics, but she just wanted to golf like her older brother, Warren. Similarly, I begged my mother to let me wrestle like my big brother from the ages of 7 to 10. The difference, Li’s golf career turned out better than my nonexistent wrestling career. Yet, despite Li’s rigorous training schedule and eminent success for her young age, she is just an 11- year-old girl who likes 11-year-old girl things. She just happens to have a killer swing and a ridiculous work ethic. PGA.com says Li has been known to skip down the fairways and deliver candy bars to fellow golfers. Her style on and off the course is nothing short of adorable.

Not only is her attitude on par this week, but so are her outfits. She’s sporting glitter, bright colors and showing off her American pride. Li finished her first round at the U.S. Open on Thursday with an 8-over 78. Her plans for the rest of the day? “Eat some more ice cream.”

Other Hot Links:
– 9 Players to Watch at the 2014 U.S. Women’s Open
– Cheyenne Woods Eyes Major Impression at U.S. Women’s Open
– Video: Lucy Li Was Better Than You When She Was 8
– High-Speed Pursuit Blows Through North Dakota Golf Course
– Peyton Manning Uses Golf to Warn Rookies of his Wrath