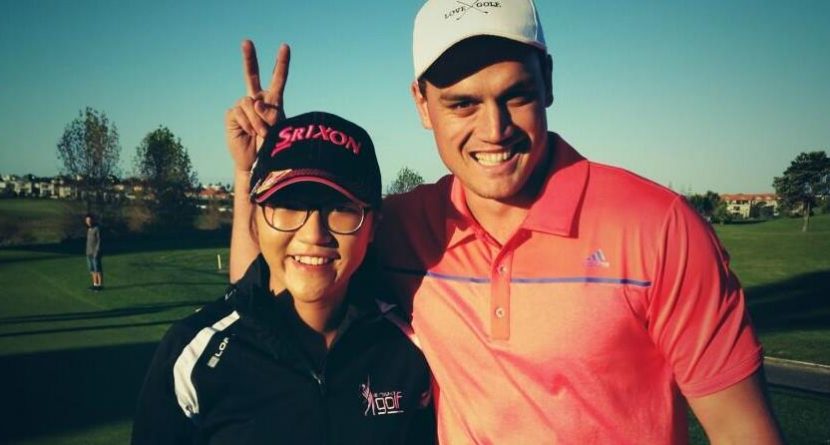 New Zealand’s Lydia Ko made it official: She’s turning pro. She may only be 16, but she’s already won two LPGA tournaments and is fourth in the world rankings. Not the amateur rankings – the ones that include every female golfer in the world.

And Ko made the expected decision official by releasing a very well-put-together video via New Zealand Golf. The spot features Israel Dagg, one of the best rugby players in the world.

For those of you not all too familiar with rugby, Dagg is a star in New Zealand. He’s 25 years old, plays his country’s most popular sport, and reached new levels of fame when he helped the All Blacks – New Zealand’s national rugby team – win the 2011 World Cup, which was held in New Zealand. Dagg scored five tries (which are like touchdowns in American football) in the tournament, and was named one of the top five players of the World Cup.

So that gives you an idea of the kind of company Ko keeps – it would be akin to a 16-year-old American golfer announcing she’s going pro by starring in a video with an up-and-coming national team star like Blake Griffin.

Anyway, just because Ko will start collecting money for tournaments she plays – some believe she would have earned close to $1 million last season if she weren’t an amateur – that doesn’t mean she’s an LPGA member. The tour has a minimum age requirement of 18, but Ko has filed a petition seeking to waive that rule. LPGA commissioner Mike Whan has yet to announce a decision.

The age-limit rule has been waived before. Lexi Thompson filed a similar petition as a 16-year-old in 2011 and Whan granted her an exception. It went into effect for the 2012 season, which started the day before she turned 17, so Thompson played one season before being of age.

Michelle Wie, meanwhile, was 15 when she turned, but she didn’t seek LPGA membership and just played a limited schedule.

Ko can continue to play in LPGA events via sponsor’s exemptions. But considering the age rule has been waived in the past, and Ko has yet to miss a cut in 23 professional tournaments, there seems to be no reason to deny her.

Made a monumental decision today with a little help from my @AllBlacks friend @Izzy_Dagg #LOVEGolf http://t.co/D212QPMstE