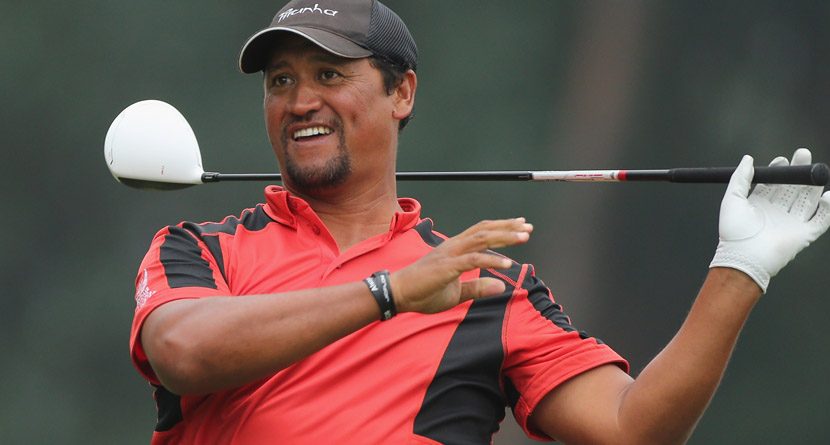 There was a time in the early part of the last decade when Trevor Immelman looked destined for greatness. Possessed of a silken swing and patrician dignity, he conquered all before him as a globe-trotting amateur before slotting effortlessly into the top tier of the European and PGA Tours.

His victory at the 2008 Masters should have propelled him to greater things. Instead, it remains the high point of a career since held hostage by injury (he spent two years battling tendonitis of the wrist) and sky-high expectations. The talent is still there – occasional bursts of scoring attest to that much – but has four years’ accumulated scar tissue left it beyond salvage? It seems grotesque to include a 23-year-old on a countdown such as this, but so precipitous has been Wie’s decline, few can really have cause to argue her case. That talent, once colossal, so far ahead of the curve as to conjure dreams of athletic superstardom, lies denuded by years of neglect and mismanagement. Tolerance for her occasionally unpleasant line in passive-aggression and bland insincerity has never been so low.

Though she claims to still harbour dreams of one day playing at the Masters, it remains to be seen if Wie possesses the strength of character or will to re-emerge a contender. Ask what’s become of Anthony Kim, once the great hope of American golf, and you’ll most likely receive a one-word answer: injuries. The California native has struggled to safeguard his joints and sinews for several years now, but in truth, his problems reach further than the treatment room.

Indeed, Kim built his reputation on a game that admitted of no doubt or hesitancy whatsoever. He hit the ball hard – often too hard – and played with an abandon that, in the hands of a player less talented, would have appeared criminally naive. More recently, in the few forays he’s made into the open waters of competition, his game has looked tentative, riven by insecurity. The outsized self-confidence that formerly enabled his timing has withered away to nothing. A comeback, if it’s to arrive, will require his game undergo something of a tactical overhaul. There was something quietly, forcefully impressive about the way Todd Hamilton set about imposing himself on the world of golf in 2004. Ringed in an aura of otherworldly wisdom, a golfing Buddha in the mould of Tom Watson, he set about bringing his 20 years of roving international experience to bear with minimal fuss. It was an approach that culminated in two giantkilling victories – first over Davis Love at the Honda Classic, then Ernie Els at that summer’s Open Championship.

The fallow years since have proven that even most hardened veteran is susceptible to sudden and dramatic shifts in circumstance. Watching Michael Campbell’s 2005 U.S. Open victory from a motel room in Myrtle Beach, I got to feel the full weight of bafflement and confusion that followed in its wake. Retief Goosen could have won, and in the end, Tiger perhaps should have. Instead, a New Zealander in pin-striped trousers and a questionable T-shirt carried the day.

America united to pose a single question: who was this guy?

The answer, quite simply, was one of the most talented golfers of his generation. Wildly inconsistent, prone to injuries and bouts of darkest nihilism, Campbell was always a volatile question mark, teetering on the brink of implosion. The years since that fateful June weekend haven’t been kind to the Hawera native, who’s struggled to rekindle his desire, but at 43 years of age, he has time yet for an autumnal renaissance. After a desultory 2012 campaign, Christina Kim will spend this season in the LPGA’s equivalent of purgatory, that grey and barren land between exempt status and the Symetra Tour.

In the ten years since she announced her presence to the golfing world, the Californian has waged a one-woman war on the LPGA’s publicity deficit. Cogent, demonstrative and occasionally shrill, she’s often assumed responsibility for adding a vibrant dash of colour to a once-monochrome canvas. In professional sport, outcomes are decided by the finest margins. When the aggregate losses and gains of a 72-hole tournament are totted up, the difference between winning and losing can often be reduced to the either-or break of a single moment. It’s an unforgiving business.

Few professionals can be more cognizant of this fact than Paul Casey, who despite possessing all the attributes that define a major champion, has spent a little over a decade struggling to attain a status in the game commensurate with his talent. There have been near misses at the majors, anchor performances at the Ryder Cup, but as yet no single success worth shouting to the galleries. The last couple of years, during which he’s had to face new uncertainties in both his professional and personal life, have been especially harsh. Y.E. Yang’s legacy is already significant. In becoming the first player to wrest from Tiger Woods a major championship he led at the 54-hole mark, the Korean did more than any single golfer to shatter the former world No. 1’s aura of invincibility. He also remains the only continental Asian player to have won a major championship.

But the three years since Yang captured the Wanamaker Trophy at Hazeltine have seen him earn little in the way of career-affirming success. Though his scoring has been efficient, victories, even spells in contention, have proven elusive. He hasn’t fallen off the map by any means – he’s undeniably present: emphatically there – but the hurtling momentum of that breakthrough has long since subsided.

Like that of Anthony Kim, Camilo Villegas’s recent career reads like an elaboration upon a well-worn sporting narrative. Young athlete rockets to the summit of his chosen sport, only to have the spoils of that success chip away at his desire and confidence.

In Kim’s case, injuries proved the catalyst in that undoing; for Villegas, it was first a question of complacency, then a mounting panic that could be read in the disintegration of his short game.

The Colombian will play this year’s Web.com circuit and a handful of PGA Tour events in the hope of making a swift return to the limelight. The challenge may well teach him humility, but it’s uncertain whether that alone will help recapture the magic of yesteryear. Some hard labour on the range and a broadening of his formerly limited palette might also be required.