Maginnes on Tap: Price is Right 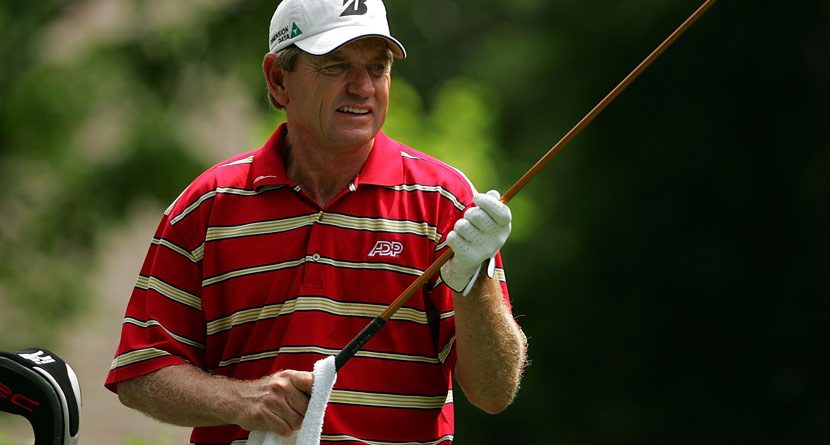 International Presidents Cup Captain Nick Price was on hand at The Honda Classic last week, keeping a close eye on those who will potentially make his squad this fall.

The World Golf Hall of Fame member may just be facing the toughest challenge of his career. Not only is he trying to do something that the International team hasn’t done in 15 years — win the cup — but by extension he is tasked with bringing relevance back to the competition.

The Presidents Cup inevitably suffers comparisons to the Ryder Cup, and that is certainly not Nick’s fault. And the fact that these matches have been so one-sided over the last decade hasn’t helped either. For these matches to raise their profile in the golf community, particularly here in America, the International team will have to make a stand in Ohio this fall.

Nick Price said, “I have a few tricks up my sleeve for our boys. There is no reason why we shouldn’t be competitive. In 18 holes of match play the underdog always has the advantage because they have nothing to lose.”

Nick went on to say that he wasn’t going to show all of his cards just yet but that he has been thinking about motivating his players and getting them excited about the prospect of beating the Americans.

The International contingent will meet with their new captain for the first time this week at Doral where 14 potential players are in the field. What seems to be clear at this point is that this year the team will be led by an enormous South African contingent. There is the potential for as many as eight South Africans to make the squad on points. Right now four of the top five in points are South African: Louis Oosthuizen, Charl Schwartzel, Ernie Els and Branden Grace all look poised to make the team.

Add to that a strong Australian contingent that includes Adam Scott, Jason Day and, now, Geoff Ogilvy, and the team could look a little different this year than in years past.

Robert Floyd, Raymond’s son, famously caddied for Robert Allenby two years ago in Australia. Floyd said that he was an “honorary Aussie for a week.” Floyd said that team unity was not a problem for the diverse International squad.

“It was great to be a part of that team coming together,” he said. “If there was one thing that I could point to is that they may have wanted it (the win) a little bit too much.  When you want something that badly in golf its tough.”

Floyd thinks that it is important for the International team not to try to “reinvent the wheel.” He said, “there are natural pairings on this team, guys who play practice rounds and travel together. Put those guys together in the matchups. It just makes sense.”

Matchups and team chemistry will not be the biggest hurdle facing the International team, and Nick Price knows that. The American Team will be made up largely of the players who let the Ryder Cup slip through their fingers in Chicago last fall. The historic collapse is still a ripe topic of conversation and will certainly be rehashed as the Presidents Cup nears.  Furthermore, the Presidents Cup could be in jeopardy of losing whatever relevance it has if the American squad has another easy time with the Internationals.

Critics often overlook the fact that part of the reason that the Presidents Cup is a better team competition for the Americans than the Ryder Cup is because you can’t hide any struggling player. All players on both squads play both of the first two sessions.

Typically in the Ryder Cup and the Presidents Cup, the Americans have the better team on paper or according to the World Ranking.  Martin Kaymer was struggling with control last year heading into the matches. Consequently the former No. 1 player in the world only played one of the first four sessions. Granted he won the critical match against Steve Stricker in the Sunday Singles but that was only the second time that he had teed it up that week. It could be argued that the format of the Presidents Cup is a truer test of team competition.

But those debates won’t help the International team either. Nick Price understands that the success of the Presidents Cup rests on this competition. If his squad doesn’t keep the matches close and exciting, then the Presidents Cup will suffer.

Nick is attempting to do what Gary Player and Greg Norman were unable to do and win the matches. Price becomes just the fifth man to captain the International Team and the first from Zimbabwe. His list of accomplishments in the game includes three major championships, two PGA Tour Player of the Year awards and induction into the World Golf Hall of Fame. But if you ask anyone who was fortunate enough to play with Nick or spend time with him throughout his career, they will all tell you that Nick Price is a better person than he was a player. They will also tell you that if there is one person who can turn the fortunes of the International contingent it is Nick Price.  He is the right man for the job.  And a big job it will be.