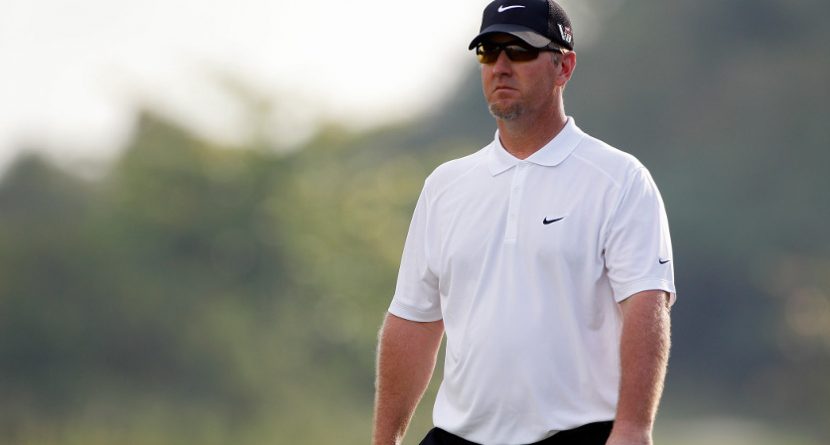 There are only 15 players who have ever been ranked No. 1 in the world since the Official World Golf Ranking was formed a quarter of a century ago.

Seven of those are already in the Hall of Fame, and one, Fred Couples, is going in this year. There are only two who meet the age minimum and haven’t gotten the nod to the Hall: Ian Woosnam and David Duval.

A case could be made for Ian Woosnam with his 29 European Tour wins, impeccable Ryder Cup record and green jacket.

No one is making a case for David Duval for the Hall of Fame, at least not yet. Heck, there are few people that are simply hoping he can make a case he is again competitive with the best players in the world. But David Duval didn’t become the No. 1 player in the world listening to those people. David is far too fine a human being to say that he has heard enough of the naysayers, so I will say it. David has heard enough and he is using everything that has been said as inspiration to become relevant again within the game.

“I take some inspiration from Andre Agassi, although I wouldn’t compare myself to him, but he went back and played the satellite tour and did what it took to get back to where he was, that is what I want to do,” said David Duval of his current plight.

“For me, I just have to get into that 4 tournament series at the end of the season. However that happens I feel like that is my best option,” David said Monday night on “Maginnes on Tap.” That four-tournament series is for the top 75 on the Web.com Tour and Nos. 126-200 on the PGA Tour FedEx Cup points list.  Those players will play a four tournaments this fall to determine the 50 players who advance to the 2013-2014 PGA Tour wrap-around season. David has a goal and is ready for the challenges that lay ahead.

“I probably shouldn’t have played last year. My knees were hurting me so badly that I was having trouble just walking the golf course,” David said of just the latest in a decade of injuries that range from vertigo to broken bones. “I am finally healthy enough to train and I have actually dropped a few pounds,” David said of his latest comeback attempt. He also said that he is excited about the way that he is playing.

He spent the past weekend in Dallas with Chris O’Connell, Matt Kuchar’s instructor. When David talks about the work that they have been doing he is clearly excited.

“I was playing 15 or 16 good holes but one foul ball would cost me a big number and the score didn’t show how well I was playing. I needed to address that,” David said.

David isn’t sure exactly what his schedule will look like for the rest of the year. He has committed to play wherever he needs to play to get into the series, dubbed the Web.com Tour Finals. For the first time in recent memory David is completely healthy and is ready for the next chapter. His life decisions have been well chronicled. He chose quality of life over career and has raised a family and become a more complete person.

He has been philosophical about his career and his life and as open and honest as any player could possibly be in any sport. But what we are waiting for are the sparks that dare us to believe that he could be coming back.  He had us on the edge of our seats at the U.S. Open in 2009 at Bethpage when he finished tied for second to Lucas Glover. But has only made one cut in a major championship since.

David’s road back probably doesn’t involve the quick Hollywood type comeback that was suggested there. He isn’t Rocky or Shane Falco. He is a man who has the potential to write the greatest comeback story golf has seen since Ben Hogan. There are a couple of elements that have to come into play for that to happen but I don’t think they are as far out of reach as others might have considered.

His golf swing has never been something that you could teach but it was sound enough to win 13 times in four years on the PGA Tour. To do that a player needs confidence. David has perhaps authored the greatest line about that subject that any athlete has ever uttered, “A player has to protect his confidence at all cost.”

Only an athlete who has lost that confidence can have that kind of insight.

If you are in the ever growing group that has counted out David Duval think of this. Steve Stricker has won eight times since he was the age David is now, 41. Also consider that David is motivated, inspired and he has been there before. David isn’t looking for lightning to strike he is simply looking for a spark, a chance or a flash of light. He knows how to take it from there.