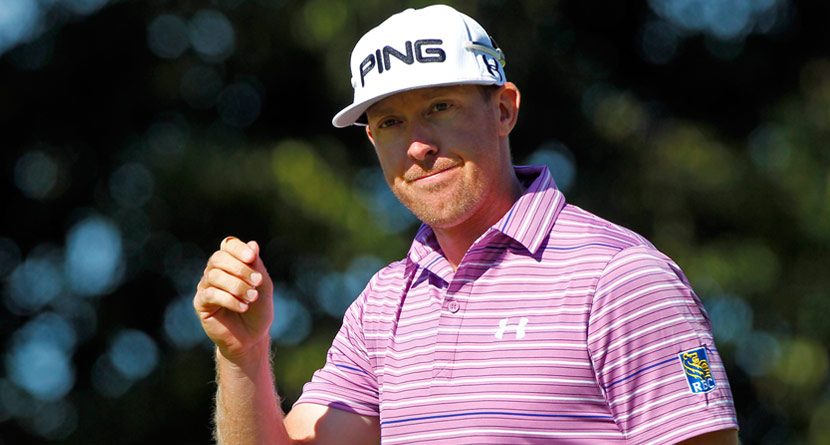 Hunter Mahan has played some good golf this year. The 31-year-old took second at the World Golf Championships-Accenture Match Play Championship event, and played in Sunday’s final pairing at both the U.S. Open and Open Championship.

But he hasn’t won an event since the Shell Houston Open in April 2012.

That streak was in serious danger of being snapped Saturday at the RBC Canadian Open, as Mahan waited in the rain to tee off for his third round, sitting in the lead at 13-under. He opened the tourney with a round of 67 on Thursday and followed it up with a bogey-less 64 on Friday. Those 131 strokes through two rounds were the fewest Mahan had turned in all year.

Then his wife called. Kandi Mahan was going into labor with the couple’s first child. Without thinking twice about the million-dollar payout he’d receive for capturing the Canadian Open title, Hunter hopped on a plane immediately to be with his wife. There are golf tournaments every weekend. Maybe Mahan hasn’t claimed a winner’s check in quite some time, but he’s not going anywhere anytime soon; he’s ranked 22nd in the world. He’s earned more than $2.3 million this year, so another million obviously would have been nice, but it’s not like the Mahan’s are struggling to make ends meet.

Witnessing the birth of your child is a once-in-a-lifetime opportunity.

Obviously, things would have been a lot more interesting had this been last week, when Mahan was in Scotland for the Open Championship. Would he have bolted when high on the leaderboard at a major, like Phil Mickelson threatened to do in 1999? Lefty was leading the U.S. Open but said he would be on the first plane out of town if the pager in his pocket alerted him that his wife, Amy, was going into labor with their first child.

And would Mahan have jetted knowing the trans-Atlantic flight might’ve taken too long to get him there in time anyway? Who knows? Luckily, Mahan doesn’t have to answer that question.

Congrats to the Mahan’s.

Other Hot Links:
– Best Tee Markers From Around the World
– Stricker Chooses Wife Over Open
– Summer of the Ace: 9 Best Holes-in-One