Mahan of the Year? 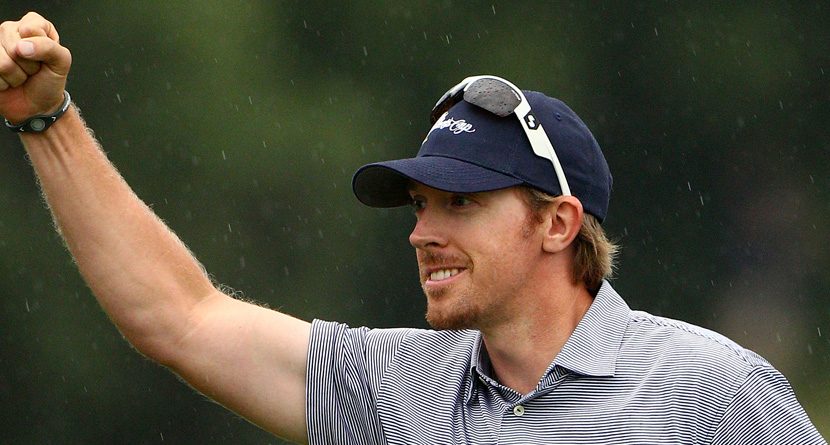 This week Hunter Mahan announced he was dropping out of the WGC-Bridgestone Invitational to spend more time with his new baby girl Zoe and wife Kandi. Last week Mahan held the 36-hole lead at the RBC Canadian Open, but decided to drop out of the tournament after he heard news that his wife was going into labor.  Some headlines called Mahan’s decision to walk away from a chance at winning the $1 million dollar first-place payout, “heroic”.

Heroic. That’s a funny word to use in this situation. Other headlines give you the impression Mahan made a monumental sacrifice to witness his daughter’s birth:

“Golf Pro Gives Up Lead to See His Child Born”

“Mahan’s Priceless Moment May Have Cost Him $1 Million”

I suppose that Hunter Mahan would agree that what he did was not a sacrifice. It was the right thing to do. Walking away from a million dollars isn’t so tough if you’ve made almost $2.5 million this year and $25 million in your career.

All parents want to be there for their kids all the time, whether it’s to see them delivered into the world, take their first steps, cheer them on at a Little League game or wipe their tears away after a breakup. But every day, there are parents who miss those important moments so their kids can have a better life down the road. Those are the real sacrifices that no one gets to hear about.

I didn’t get to see much of my dad when I was little. He was working two jobs so my mom could stay at home for the first 12 years of my life. She was the one who saw my first steps, heard my first word and wiped away my tears when I got dumped for the first time in high school. Does he wish he had been there? Of course. So do the single mothers who have to work 60 hours a week to give their children the kind of life any kid deserves. The mothers who fight frustration every time they have to turn their child over to Grandpa or Brother or Sister to take care of them for the day, all the while hoping that someday, when their child grows up, he or she will understand the reasons they couldn’t be there.

Prince William has been praised as a “trailblazer” and a true “father figure” for breaking the tradition of the monarchy and taking a two-week paternity leave — “an example for dads everywhere.” As a woman, I admire his decision because I know that it was a statement of progress. But what about dads like mine who work so the mother can stay home? Or the single dads who have to earn a living so their kid can go to college someday? Don’t they deserve a pat on the back too?

Don’t get me wrong — I love when athletes do the right thing regardless of what’s at stake on the field, or in Hunter’s case, on the course.  But we should be careful about calling them “heroic” because there are millions of people, moms and dads alike, who do the right thing… every day.