Major Win Would Be Major For These Guys 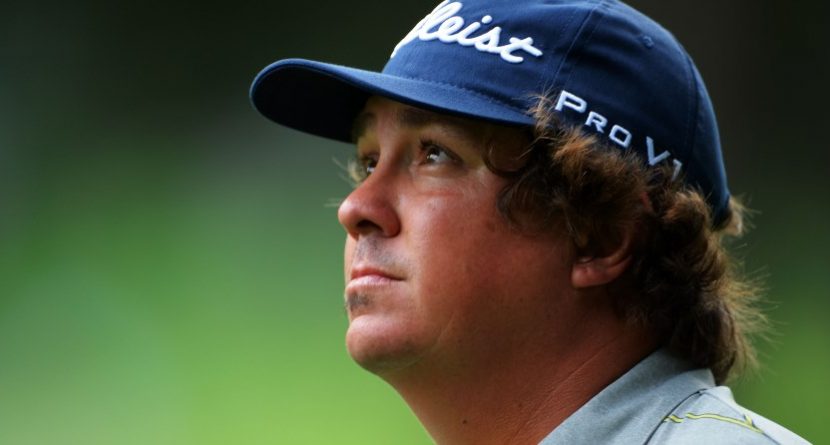 Unless the unimaginable happens, Tiger Woods is not going to win his 15th major this season. At +1 overall, he’s 10 shots back of the lead. And the duel with Phil Mickelson we yearned for isn’t going to happen either; Mickelson’s at +2.

Who would have thought Rory McIlroy (even par) would be in better position going into the weekend than Woods and Mickelson?

So the big three appear finished, but some big names are still sitting atop the leaderboard. Here’s a look at the top eight and what a PGA Championship win would mean for them.

Jason Dufner – The King of Inexpressiveness scored a course-record 63 Friday after leaving a birdie putt on 18 about 18 inches short. The 62 would have been the first in a major; instead, Dufner joined just 23 other men to have gone so low at a major. His 9-under gives him a two-shot lead, and a win on Sunday would not only mark his first major, it’d give him a bit of redemption after he fell apart down the stretch and lost the 2011 PGA Championship in a playoff.

Adam Scott – Two shots behind Dufner is Scott, the reigning Masters champion. A win at Oak Hill for the world No. 5 would surely hand him Player of the Year honors as the only one to capture multiple majors. Remember when the Aussie was one of those guys mentioned as Best Player Without A Major?

Matt Kuchar – Right behind Scott in the world rankings and even with him at 7-under through two rounds of the PGA Championship is Kuchar, a guy now at the front of that Best-Player-Without-A-Major discussion. A win on Sunday would not only be his first major, but also his third win of the season, leaving only Woods with more.

Jim Furyk – Also 7-under is the man with the looping swing, trying to win one for the old guys. A pair of 32-year-olds (Scott and Justin Rose) won the first two majors, but a pair of 43-year-olds (Mickelson and possibly Furyk) could take the last two. Furyk hasn’t won anything since 2010, and captured his only major 10 years ago at the U.S. Open.

Justin Rose – The reigning U.S. Open champion sits at 6-under, but is generally in the same boat as Scott – Rose boasts only one win on the year, but it was a major, and a second major win would hand him POY honors. The Englishman is No. 4 in the world.

Henrik Stenson – If anyone appears ready for a breakthrough, it’s Stenson. The Swede tied for second last week at the Bridgestone Invitational, and claimed runner-up all to himself in his start before that at the Open Championship. He’s lurking again at 6-under, seeking his first major and first win on the PGA Tour since 2009, which would push him into the world’s top 10.

Robert Garrigus – The lowest-ranked fellow among those mentioned on this list (54th in the world), Garrigus seeks his first major title and his second career PGA Tour win (to go with the 2010 Children’s Miracle Network Classic). He was sitting pretty Friday until he bogeyed Nos. 17 and 18, dropping him to T-7 at 5-under.

Steve Stricker – Also 5-under, Stricker is also on the Best-Player-Without-A-Major list. The 46-year-old pared back his schedule this year to spend more time with his family, yet he’s played well enough in his 10 official PGA events to rank 13th in the world. If Stricker wins the PGA, thus topping his best previous major finish (second at the 1998 PGA Championship), would you blame him for retiring for good right then and there?

Other Hot Links:
– 3 Golfers Who Have Hit The Lottery
– Back9 in 90: Rory’s McMansion
– Ian Poulter on Garbage Plates & Fashion