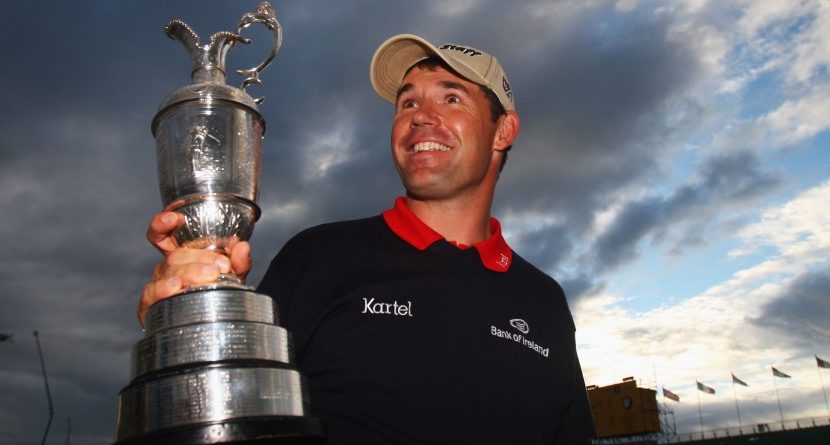 With his come-from-behind victory last year at the Open Championship, Phil Mickelson’s time with the famed claret jug is nearing its end. Lefty must relinquish possession of the trophy next week, once he arrives at Royal Liverpool for this year’s tournament.

He’s enjoyed his ride with the chalice, though, and aims to one day gain possession of it again, if not this year. That would make his friends happy. In addition to bringing it by the Callaway Golf headquarters to let his sponsor’s employees get a closer look, Mickelson has left it in locker rooms while out playing at clubs where he’s a member, letting fellow members take pictures or take drinks out of it.

“I only let them drink the good stuff of course,” he said. “There’s been nothing in there that is sub-par. But the best was a 1990 bottle of Romanee Conti wine. It wasn’t on my dime thankfully. It costs about $40,000.”

Not surprisingly, drinking is the most standard of uses for the jug. As for one of the most uncommon? Filling it with ladybugs, or ladybirds as they’re known around the United Kingdom. That’s what Padraig Harrington did with his son, Patrick, after winning in 2007:

We assume that came after — or the jug was cleaned before — the John Smith’s Smooth Bitter beer that Harrington drank from the claret jug. And the whiskey he sipped. Regardless, a lot of beer and whiskey was drank and a lot ladybugs were captured because Harrington won again in 2008.

Beer is usually the way to go. That’s what Ben Curtis filled it with in 2003. “It just seemed like I was intoxicated for the first week,” he said.

Stewart Cink, the ’09 winner, said he first poured in Guinness, his brew of choice. His kids followed with some Coke, and later, he actually basted some barbecue with it. Eventually, he enjoyed some wine out of the cup.

That libation is actually how the claret jug gets its name. The Bordeaux region of France produces a dry red wine called claret. Silver jugs were used to serve that wine at parties in the 1800s.

Among the other liquids to have been consumed from the prize, Greg Norman popped a bottle of champagne on the 18th hole late at night following his victory in 1986, then drank it out of the claret jug. And Justin Leonard’s mother brewed some ice tea and served it to her son, the 1997 victor.

Prior to Mickelson’s top-of-the-line wine, the most expensive drink consumed from the container might have been Cristal, a type of champagne that regularly goes for more than $200 per bottle. That’s what Todd Hamilton enjoyed after he triumphed in 2004. Upon returning home to Dallas, a restaurant-owning friend gave Hamilton $500 off his bill for bringing in the trophy.

And these are just the stories of which we’re aware. Tiger Woods has won the Open Championship three times (2000,’05, ’06) but won’t say what he put in the claret jug. He joked that he couldn’t remember because of what he drank out of it. “I certainly enjoyed my libations of choice. But that’s the extent of it. I never took it any further than that. It never left the house,” he said.

Darren Clarke, however, says he didn’t drop a single drop of anything inside the jug while it was in his possession after his 2011 win. He said he has too much respect for the trophy.

Or maybe he just didn’t find it sanitary after hearing all these stories. This is the same exact jug we’re talking about here, not a new one every year.

The first claret jug was presented in 1873, but a replica has been handed out since 1927. The Royal & Ancient took control and opted to save the original, putting it on permanent display in the clubhouse of The Royal and Ancient Golf Club of St. Andrews.

The current trophy is engraved with the winner’s name each year. From there, it is in that golfer’s hands until he returns to the site of the next year’s Open Championship. Upon handing it over, the player receives his own replica to keep forever — to do with whatever he pleases.