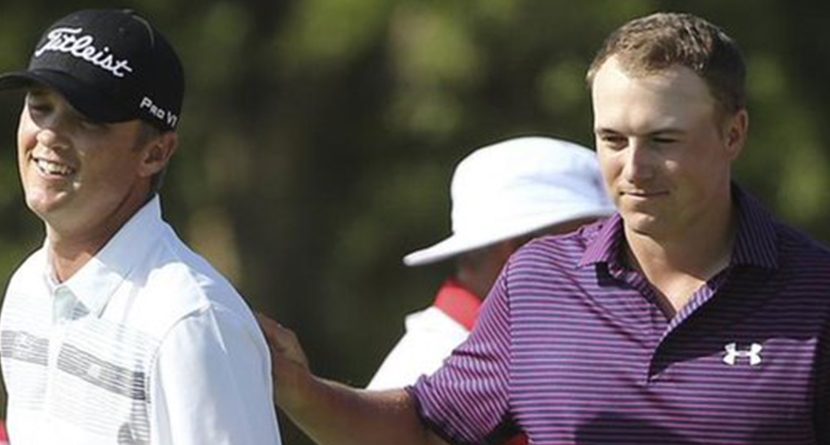 Matt Jones survived a Sunday of attrition at the Australian Open that included a devil’s trifecta on the front nine — a bogey, a double bogey and a triple bogey — to hang on for a one-stroke victory over defending champion Jordan Spieth and the country’s favorite son Adam Scott.

Leading by three strokes heading into the final round and paired with two-time major champion Spieth, Jones opened up bogey-double bogey to drop three shots over the first two holes. Spieth could only manage to pick up one stroke during Jones fall back to the field opening with a pair of bogeys himself. Leveling out over the course of the front nine, the final pair found themselves tied for the lead with Scott and clubhouse leader Rod Pampling who shot a final-round 10-under par 61.

Despite letting the field back into the mix, Jones played the back nine blemish free — something neither Spieth nor Scott could boast — to head up the 18th hole with a one-shot lead over Scott and two strokes over Spieth. Jones missed a 25-footer for birdie that would have sealed the deal and had to watch one of the best putters in the world try to tie his number from 20 feet.

With Spieth in at 7-under, the stage was set for Jones to tap in a three-footer for the win.

The win for Jones was just his second as a professional — his other came at the 2014 Shell Houston Open, also in dramatic fashion. As a part of the Open Championship qualification series, the Aussie Open punched Jones’ ticket to Royal Troon in 2016. He also moved up the Official World Golf Rankings to No. 51, just outside of the cutoff for exemption into the three other major championships.

If he can manage to move into the top-50 by year’s end, it could be a special year at the majors for Jones if recent history is an indicator.