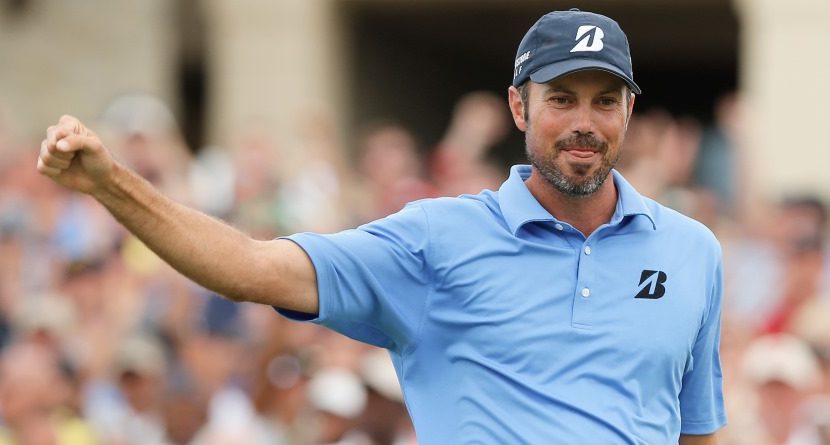 It’s a good thing Matt Kuchar is tall and stands out in a crowd. That’s probably what saved him a very long walk on Monday.

Kuchar is in Scotland for the Open Championship and he was trying to get to Muirfield for a practice round at the start of the week. But the ride he called for to pick him up at the farmhouse he’s renting never showed up.

So he decided to start thumbing.

Golf Channel reports that when the car did not arrive at the scheduled time, Kuchar walked out to the main road and waited for a bit longer. And apparently it’s not too far of a drive from his house to the golf course. It’s odd that a player with six career PGA Tour victories — including two this season — had to resort to hitchhiking to the site of a major championship.

According to the Golf Channel story, the first few cars that drove past Kuchar did not stop. He was eventually recognized by someone, and that driver pulled over and gave him a ride to the course.

Something tells us that these players are not being shuttled around in Cadillacs or oversized SUVs. We just hope this is an isolated incident. Otherwise we might see something similar to what took place with Rory McIlroy at the Ryder Cup last fall.

This reminds us of the story out of Pennsylvania, where a Dave Matthews Band fan on her way to the band’s concert drove Dave Matthews himself — who was hitchhiking after his bicycle got a flat tire — to the show over the weekend.

Other Hot Links:
– Many Things, Like Ladybugs, Have Filled Claret Jug
– The Big Easy Has His Own App
– The 9: Mind Tricks, Trick Shots & Shots of Tiger