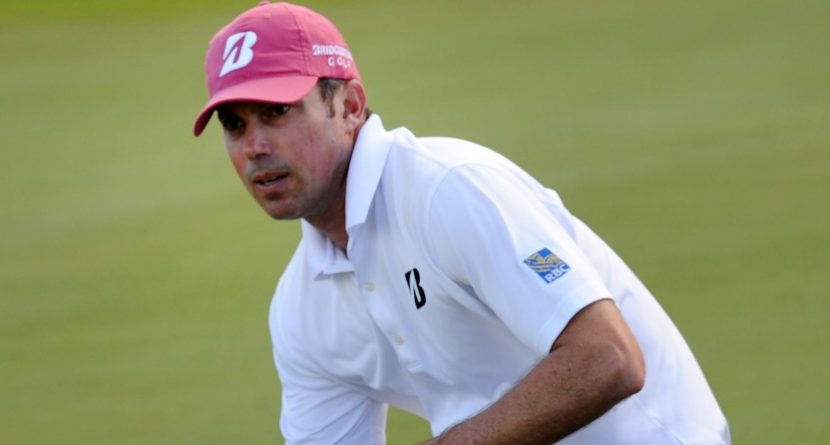 Close followers of the annual PGA Tour stop in Palm Desert, Calif. – now called the Humana Challenge, formerly the Bob Hope Classic – may have noticed that world No. 8 Matt Kuchar was absent last week. It was the first time in eight years that he missed the event.

That’s because after the most lucrative year of his career – more than $5.6 million in on-course earnings in 2013 – Kuchar’s getting in a little family vacation. He recorded a couple top-10 finishes at the Hyundai Tournament of Champions in Maui and the Sony Open in Honolulu, then opted to stay in Hawaii for four more weeks.

What do golfers do on vacation, when normal people typically golf? Apparently they golf too. And swim with sharks. To be precise: 25-foot whale sharks. At least that’s how Kuchar rolls in Hawaii, where he’s been hanging out with fellow pro Parker McLachlin:

Matt Kuchar and I had a fun day playing golf at Kohanaiki and swimming with this 25 foot whale shark pic.twitter.com/8Lwvj6YGDQ

Kohanaiki Golf & Ocean Club is in Kailua-Kona on the big island of Hawaii, so we assume Kuchar’s and McLachlin’s shark expedition took place just off the coast from there. No need to fret, though, about Kuchar’s two young sons, Cameron and Carson, living life without a father. According to PGA.com, whale sharks generally feed on plankton and small fish, not humans.

As long as he doesn’t encounter any rogue sharks, and assuming he gets right back to work upon returning to the contiguous 48, Kuchar will make his next start at the Northern Trust Open at Riviera Country Club just west of Los Angeles.