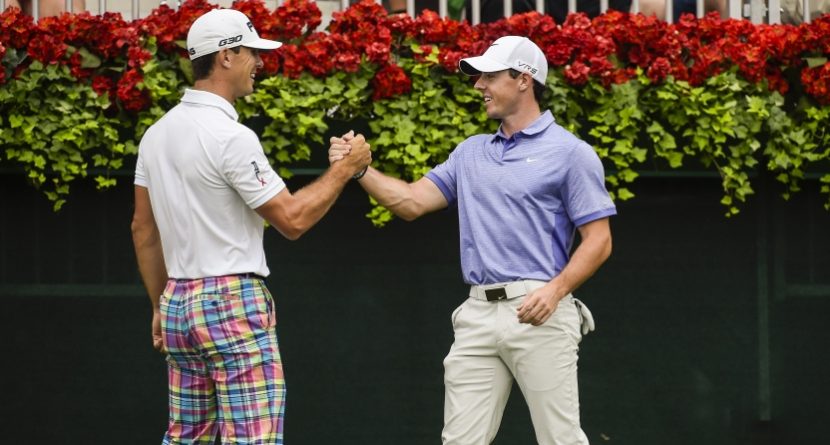 Just as soon as it looked as if Rory McIlroy would run away with every single golf award this year, Billy Horschel happened. It looks as if we have a race for PGA Tour Player of the Year.

Billy and Rory are the clear front-runners, but the tour on Monday announced Bubba Watson, Martin Kaymer and Jimmy Walker as Player of the Year candidates as well. Voting is done only by PGA Tour members and will close on Sept. 25. Winners of the player and rookie of the year honors will be revealed the week of Sept. 28.

Let’s take a look at the candidates (in the order we’d vote):

Rory McIlroy: After a dismal 2013, the 25-year-old Northern Irishman went on a tear this summer (whether or not it was related to his breakup from Caroline Wozniacki is up to you). McIlroy may not have won the FedExCup (he finished third), but he led the PGA Tour in money ($8,280,096) and wins (three). Of course, two of those victories were majors (Open Championship and PGA Championship), the largest reason why he’s the POY favorite.

Billy Horschel: The former Florida Gator was nowhere close to this discussion three weeks ago, with more missed cuts than top-10s. But 12 straight rounds in the 60s can change a lot, and that incredible run netted Horschel a runner-up and two wins. Because that pair of triumphs came in the FedExCup playoffs, he walked with the $10 million bonus for which players have been earning points all season.

Martin Kaymer: The 29-year-old German’s best stretch of golf came in late spring, when he snagged the Players Championship – considered by many to be the tour’s “fifth major” – and followed that up five weeks later with a dominating U.S. Open victory. His results outside of those events were solid, but not overly impressive.

Bubba Watson: The season’s first major winner was Watson, who played strong early in the season prior to collecting his second Masters title. He posted top-10 results in six of his first eight events, including a win at the Waste Management Phoenix Open. After the Masters, Watson missed the cut at the next two majors, but placed third at the Memorial Tournament and second at the BMW Championship. He finished the year second in money ($6,336,978).

Jimmy Walker: He matched McIlroy with three wins on the season, which helped Walker finish fourth in earnings ($5,787,016), but those victories weren’t against the strongest of fields (Frys.com Open, Sony Open, AT&T Pebble Beach Pro-Am). Though he didn’t contend for wins, he was strong in the majors (three top-10s), all of which resulted in a career year for Walker.

Also announced Monday were the PGA Tour Rookie of the Year nominees: Victor Dubuisson, Chesson Hadley and Brooks Koepka. Hadley is the only one who garnered a win (Puerto Rico Open), but Dubuisson nearly did (losing the WGC-Accenture Match Play Championship final on the fifth extra hole) and Koepka recorded the best result among the trio at a major (T-4  at U.S. Open).