McIlroy, Rose, Stenson Try To 1-Up Each Other In Dubai 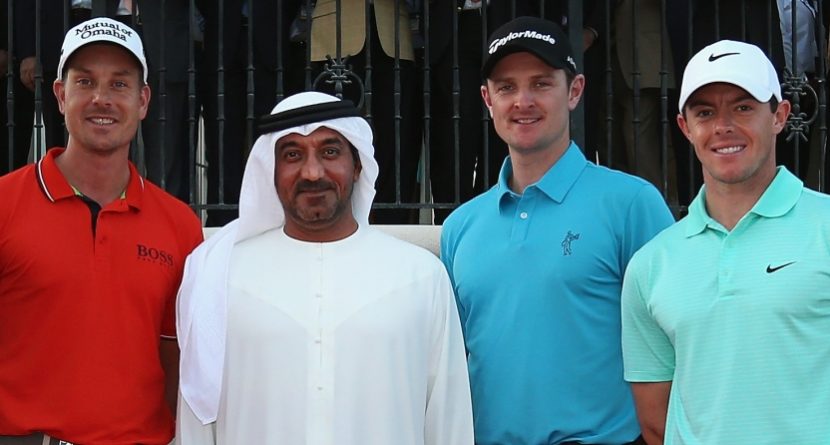 En route to his Race to Dubai title last year, Henrik Stenson turned in the European Tour’s Shot of the Year with his approach on the 620-yard, par-5 18th hole in the final round of the DP World Tour Championship. He stroked a 3-wood some 248 yards to the green, where the ball stopped inches from the cup. He went on to eagle the hole and win the tournament by six strokes.

Rory McIlroy’s victory on the Earth course at Jumeirah Golf Estates in 2012 was a little closer than that. He birdied the final five holes — including a nervy putt on 18 — to edge Justin Rose by two strokes and give him the Race to Dubai title as well.

McIlroy needed all those birdies after Rose carded a 10-under 62 that day. And Rose nearly eagled No. 18 after a tricky 60-foot putt navigated to within inches of dropping.

The three European stars tried to recreate their classic 18th-hole shots this week prior to the 2014 DP World Tour Championship in Dubai. Turns out these guys still got it, and Stenson can even drain putts with his leg:

McIlroy has already clinched this year’s Race to Dubai title, while Stenson sits in second place and Rose is in eighth.