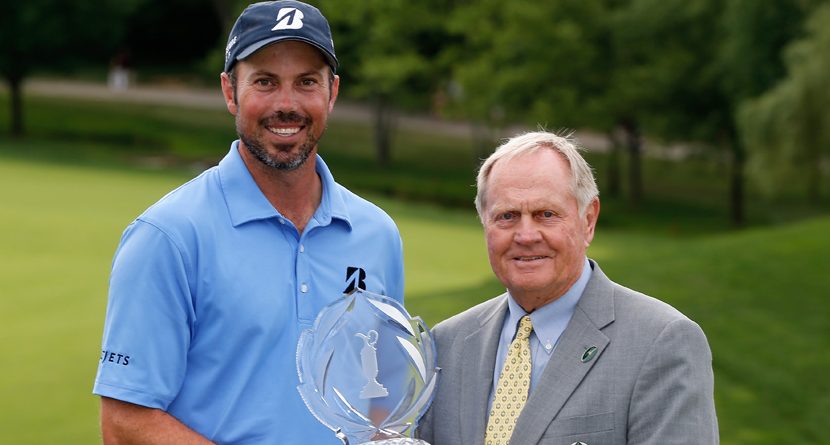 One notable golfer had a strong four rounds and took the trophy, another one struggled mightily, while a relatively unknown player turned some heads. Here’s a few things we picked out from the event in Dublin, Ohio.

Kuchar Shows Some Respect
After firing a 68 en route to securing his two-shot victory on Sunday, Matt Kuchar showed that even grown men (he’s 34) can show respect for the game’s greats.

“This stuff never gets old,” said Kuchar while holding his two sons. “To shake Mr. Nicklaus’ hand, to win the tournament, that’s pretty great. But to have my family run onto the green, this is as special as it gets.”

We think that referring to Nicklaus, one of the “Big Three,” as “Mr. Nicklaus” is pretty great too. Kuchar is now the hottest golfer on the Tour right now, along with Tiger Woods — they are the only players with multiple wins this season.

Tiger Struggles
Woods, on the other hand, was not on point in Ohio. He carded a 71 and a 74 Thursday and Friday, and then closed with a 79-72 weekend to finish 8-over par. His shot total of 296 was two strokes shy of his worst tally ever for a 72-hole tournament.

This doesn’t seem like a good sign for Woods, with the U.S. Open just two weeks away. Nicklaus, however, doesn’t think it’s time to start worrying.

“It just happened,” Nicklaus said. “This won’t much matter for him.”

Woods sang a similar tune: “It happens to us all. And I’ll go home next week and practice.” Chappell Peaks At The Right Time
Kevin Chappell has never won a PGA Tour event, and he’s got only one professional victory on his resume — the 2010 Fresh Express Classic, a Nationwide Tour event. Since then, he’s finished tied for second at the 2011 Valero Texas Open and tied for third at the U.S. Open that year.

Chappell’s runner-up finish on Sunday, which included pars on the first 12 holes and birdies on four of the final six, showed the rest of the Tour that he’s got what it takes to contend for a victory. He picked a good time to do that.