Michael Phelps Quickly Improving at Golf, But Not Quickly Enough 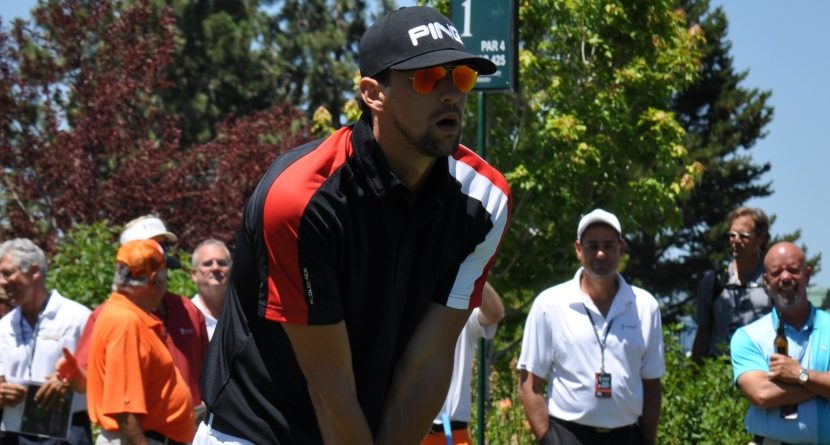 Michael Phelps says he’s dropped nearly 30 strokes off his golf scores in the past year, and he’s still not happy.

The greatest Olympic champion of all time will tee off Friday morning at his first actual golf tournament in which money is on the line – the American Century Championship, better known as the Lake Tahoe celebrity golf tournament. Phelps has participated in Pro-Ams before, but there are no professional golfers at Tahoe. Just celebrities – athletes, former athletes, actors, etc. – so they’re the main attraction.

And despite drastic improvement in his favorite hobby – one he’d like to become a profession, if he had his wish – Phelps is nowhere near the level of the favorites. He doesn’t like that, but understands. “It’s been an eye-opening experience for me just because I’ve usually been able to pick everything up fairly quickly,” Phelps said during a press conference Thursday, adding, “It’s brutal. I don’t understand how it can be that hard to hit this little, tiny white ball and hit it straight every time. But it just doesn’t happen for me.”

At last, Phelps is among us mere mortals.

Then again, in all likelihood, Phelps will soon be much better than us at golf, too. He says last year, before six months with noted golf coach Hank Haney on “The Haney Project,” he struggled to break 115 in an 18-hole round. Now he can post scores in the mid-80s.

And time is something of which the 18-time gold-medal winner has plenty. We working schmucks don’t. Phelps’ swimming career brought in millions of dollars, meaning he never has to work a day the rest of his life. He can play golf every single day.

“I try to get out a couple times a week. There are a lot of days where I don’t have anything to do,” he said.

However, he doesn’t exactly enjoy playing alone. And just because he has the free time everyone dreams of, few other people do.

“It’s always hard because whenever I want to go out during the week, if I’m home, everybody has a job. So it kind of stinks. I’m like calling or texting somebody to go golf and they’re like, Dude, I have a nine-to-five. ‘Come on, can’t you just, take today off.’ ‘No, I did that last week so I don’t think I can do it this week.'”

The driving range is the perfect place for the lonely golfer. Yet, that hasn’t helped Phelps’ driving.

“I do know how to hit all different kinds of shots and that’s something that Hank taught me. And I can get up and feel confident about every club in my bag but one, the driver. I can’t stand that thing. That thing is so annoying. Sometimes it’s really good. Sometimes he’s not nice,” Phelps said. Phelps is grouped in Tahoe with Shane Battier, he of the NBA-champion Miami Heat, and actor Ray Romano. Battier placed 67th out of 82 last year, with Romano at T64. So Phelps should be able to hang.

One thing’s for sure: He won’t be intimidated by all the celebrities.

“I was coming in (Wednesday) night on the plane from the ESPYs, and it was Ahmad (Rashad) and Ray Allen; we were talking about golf,” Phelps said. “We had all our golf stories. That’s the cool thing – we all just love the sport. Even though it’s a very challenging sport and a very humbling sport, we all still love to go out there and play any course.”