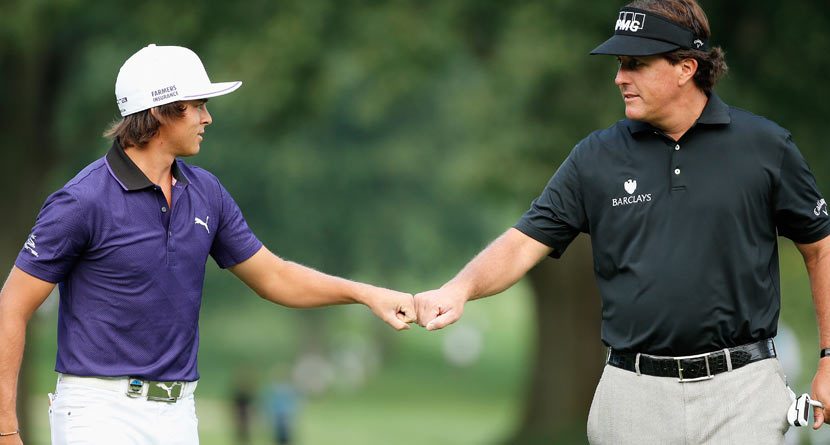 It’s taken him nearly a month, but Phil Mickelson finally snagged himself a tee time at Pinehurst.

Mickelson spent Monday afternoon cruising around the No. 2 course with his good friend and practice round/gambling buddy, Rickie Fowler.

After the round, Lefty took time to review the course for Pinehurst’s website:

The runner-up in the 1999 U.S. Open at Pinehurst had been desperately trying to find his way onto the resort’s No. 2 course, the site of this year’s U.S. Open, with no avail until now. Even the Mannings got out there before he did, and they aren’t even playing in the U.S. Open. Phil, who last year finished runner-up for a record sixth time in America’s championship, has been looking forward to getting in some practice at Pinehurst since early May.

Mickelson and Fowler weren’t the only two pros taking on Pinehurst on their day off. Rory McIlroy took the time to hit the range and get a feel for the course …

… and took a moment on 18 to re-create Payne Stewart’s epic tournament clinching putt from the 1999 U.S. Open.

McIlroy also gave his thoughts on the course:

With the U.S. Open a little more than two weeks away, players should all be flocking to Pinehurst in the coming days to get a feel for the course, which has been renovated since the last time the PGA Tour swung through these parts of North Carolina. If Mickelson’s assessment of the course is accurate, these guys certainly have some work to do before June 12.