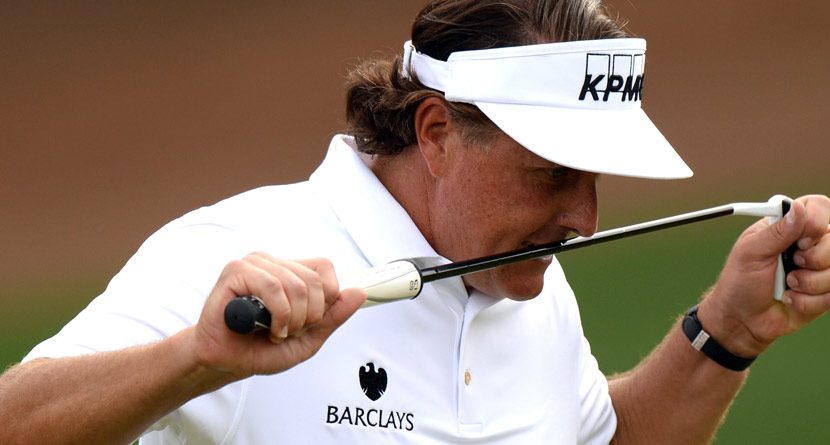 Back in 1999, a 29-year-old Phil Mickelson found himself in contention to capture his first major. He and Payne Stewart were tied through 16 holes of the final round at the U.S. Open.

But Mickelson carried a pager with him that could sound off at any moment. His wife, Amy, was back in Arizona about to give birth to the couple’s first child. No matter where he sat on the leaderboard, if the beeper went off, Mickelson vowed he would leave to be by Amy’s side.

He finished the round because the pager never buzzed, and he ended up runner-up by one stroke when Stewart sank a 15-foot putt on No. 18, the longest winning putt in U.S. Open history. Had that putt not fallen, Mickelson and Stewart would have played an 18-hole playoff the next day. They would have teed off right about the time Amy eventually went into labor.

That child, Amanda, is now graduating from eighth grade. And once again, Mickelson is putting her before the U.S. Open. He flew home Monday night so he could attend her graduation Wednesday, when she’ll be a speaker at the ceremony.

Mickelson took off a little early due to the rainy weather at Merion Golf Club, but shouldn’t have problems returning to Philadelphia. That will be key, as he tees off Thursday morning at 7:11 a.m.

Lefty’s devotion to family reminds us of three other instances in which sports became secondary:

Crenshaw Attends Teacher’s Funeral Before Winning ’95 Masters
Ben Crenshaw wasn’t playing well as he arrived in Augusta for the 1995 Masters tournament. And the fact that his lifelong mentor/coach, Harvey Penick, passed away the Sunday prior didn’t help. Crenshaw returned to Austin to be a pall bearer in Penick’s funeral on Wednesday, then made it back to Augusta in time to shoot a 70 on Thursday. He’d stay in the 60s over the next three rounds and beat Davis Love III by one shot to win his second and final Masters. Mourning Leaves Olympics To Witness Daughter’s Birth
As Alonzo Mourning led all players in blocks at the 2000 Sydney Olympics, his wife, Tracy, was back home pregnant with their second child. When the U.S. team advanced to the semifinals, Mourning learned that Tracy was ready to go into labor, so he boarded a flight back to Florida – not an easy trek from Australia – and arrived at the hospital 20 minutes before Myka Sydney was born. He then jumped back on a plane and returned to Sydney in time to help Team USA defeat France for the gold medal.

Fisher Arrives Mid-Game After Daughter’s Surgery
Upon learning that one of his twin 10-month-old daughters, Tatum, had been diagnosed with a rare form of cancer – retinoblastoma – in her left eye, Derek Fisher of the Utah Jazz didn’t hesitate to skip Game 1 of the 2007 Western Conference semifinals. He flew to New York with his wife and daughter, the surgery was successful, and all three returned to Utah immediately after leaving the hospital. Fisher arrived at the arena while Game 2 was underway, entered the game late in the third quarter, forced a key turnover late in the fourth quarter, and sank a crucial 3-pointer in overtime to help Utah defeat Golden State.