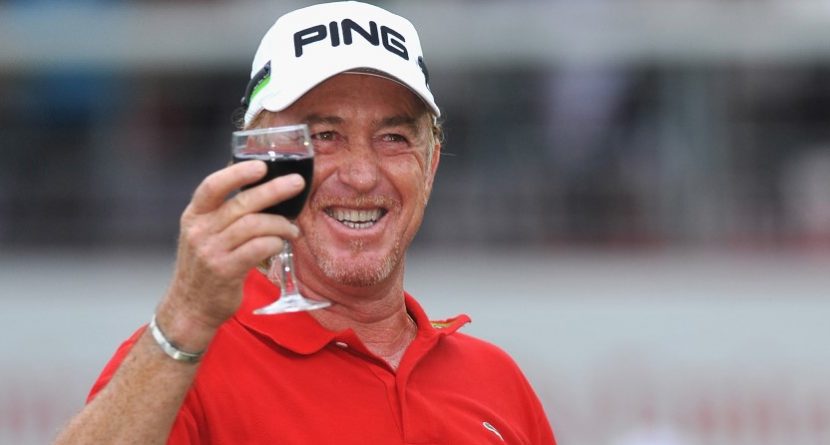 Problem is, those gifts at pro tournaments are largely fruitless. For example, Hunter Mahan scored a hole-in-one last month at the BMW Championship. His prize: a BMW i3, which is a tiny, two-door electric car.

That’s all fine and good, but for Mahan? This is a man who customizes trucks and SUVs. He won’t find much use for an electric car that can barely fit him and his clubs – unless he’s putting the buggy up for sale.

However, the reward for sinking an ace on the eighth hole over the weekend at the European Tour’s Portugal Masters was 100 bottles of wine from SEXY wines. And one perfectly-suited golfer won that prize: Miguel Angel Jimenez.

The most interesting golfer in the world, who has never hidden his penchant for cigars and wine, used a 7-iron on the 168-yard hole. He didn’t come close to winning the tournament – Jimenez finished 5-under overall, 13 strokes behind David Lynn – but we wouldn’t be surprised if the Spaniard got word of the promotion at the eighth hole and made that his focus for the weekend.

Why try to make great shot after great shot and win 333,330 Euros (roughly $450,000) for first place when you can make one great shot and not have to buy wine for – at Jimenez’s pace – three months? Well played, Miguel, well played.