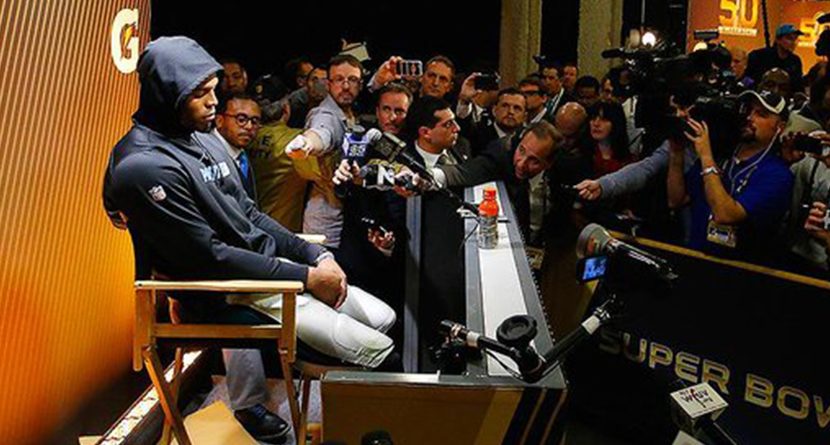 Following unquestionably the toughest losses of their respective careers, both Cam Newton and Dustin Johnson were called upon by the media to explain their pain publicly.

Newton had just fallen to the Denver Broncos in Super Bowl 50 and Johnson had just 3-putted to lose to Jordan Spieth at the U.S. Open at Chambers Bay. How each handled their post-round media obligations was not a blueprint for proper behavior, but was most definitely a better representation of their true feelings than canned, clichéd press conference responses.

It’s a difficult expectation for an athlete to put his feelings into words immediately following one of the most gut-wrenching losses of his life, but it’s a responsibility nonetheless.

Johnson, it should be said, didn’t actually go to the press center to talk to assembled media, but he did give a scrum of reporters a reasoned response in the above video and also later in the parking lot.

Newton, on the other hand, is the recipient of an inordinate amount of undue criticism. Whether it’s race related, age related or culturally related, the criticism comes at Cam hard and fast and his subdued and succinct press conference probably won’t do anything to help his reputation with those detractors.

The point is, rightly or wrongly, professional athletes do have a responsibility to the media to offer a critique of their performances, especially on the biggest stages such as the Super Bowl or a major championship. Does that responsibility seem harsh or overdone at times? Of course, but that’s part of the deal.

Instead of breaking down Cam Newton’s tone or Dustin Johnson’s perceived level of intellect, we should take these glimpses into their raw emotion for what they are: our best, truest look at the athletes we admire.