Monday Morning Provisional: Is Jordan Spieth’s Travel Schedule Going To Catch Up With Him? 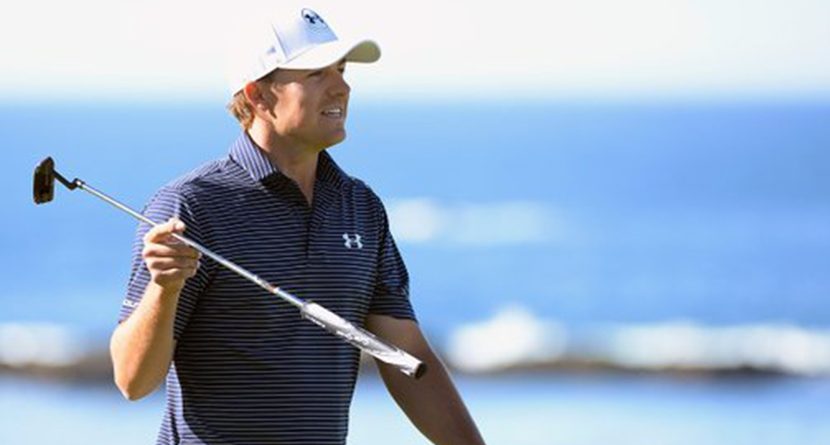 A recent Wall Street Journal article put a number on Jordan Spieth’s globetrotting schedule for 2016, reporting that the World No. 1 would cover more than 125,000 travel miles between October 2015 and August 2016. Playing a schedule that has included trips to Asia, Australia and the Middle East already, fatigue is a real concern for Spieth coming off the best year of his career.

Furthermore, that fatigue has already creeped in. Following a tie for fifth place at the Abu Dhabi HSBC Golf Championship, Spieth copped to feeling “beat up, mentally and physically.”

“‘I’m very tired. I am,” Spieth told the Associated Press. ”I’m not 100 percent right now. It shows in certain places.

”This week, the first day I was here I was striping it and since then I have been a little weak and my decision-making has been off. But we had a lot of fun times.”

The “fun times” are something Spieth is going to have to weigh against playing his best golf, if the past is any indication. It’s important to remember that a year ago at this time, Spieth was simply a very good player. While it sounds a bit harsh to simplify the accomplishments of a top-15 player in the world to “very good,” the realistic truth of the matter is that without the top ranking in the world and devoid of major championship victories, Spieth was comparatively a non-entity on the global stage.

There’s a delicate balance that needs to be found when a very good player becomes a transcendent athlete. Spieth went from “can he keep himself calm over 72 holes to win multiple times on the PGA Tour” to “can this kid win the calendar Grand Slam” in the matter of 24 months.

Don’t forget that prior to the silly season of 2015, Spieth had shown glimpses of what he has become, but when the pressure was on, he often came up short. In 2013 and 2014, Spieth won exactly one time. While he had contended on enough leaderboards to show the promise that’s needed to be a sustainable star on the PGA Tour, there’s no such thing as a sure thing.

Ty Tryon is on Line 1. And when you’re finished, John Jacobs and Eddie Pearce are on Line 2.

But, as fate would have it, Spieth annihilated those doubts and had one of the best seasons in the history of the game in 2015 — two major championships, five wins overall and seven other top-5 finishes, including two in the majors he didn’t win. He skyrocketed from star-in-waiting to the biggest draw in the sport outside of Tiger Woods.

And Woods is a good place to start with the predicament in which Spieth now finds himself. When you’re a multiple major champion, the top player in the game and a marketer’s dream, you’re bound to get pulled in a lot of different directions. There’s products to push, endorsement checks to sign, appearance fees to chase, all of which are a result of solid play. Yet all of those things have the opportunity to have adverse effects on future form.

Spieth is in the middle of that firestorm right now. He and his management team are fielding offers from all over the globe. Everybody wants a piece of the Golden Child. What Spieth and his team need to do now is take a page out of Tiger’s book, out of Rory’s book, even out of Adam Scott’s book and be über selective. That means, among other things, saying no to some of the less-prestigious events that gave him a chance when he was up-and-coming.

Playing in the John Deere Classic, the Valspar and the RBC Heritage is commendable. A Spieth always pays his debts. But do that once and move along. The balance of fame and the priority of his legacy depend upon Spieth making good business decisions. There is no right or wrong path, just one that leads to an illustrious career inside the ropes versus one that will endear him to tournament directors around the world, resulting in subpar performances more often.

Spieth can choose either path he wants — he’s more than earned that right — but to make sure that his appearance fees and his demand stay high, he needs to play his best golf at the biggest events. Even if that means saying no more often.