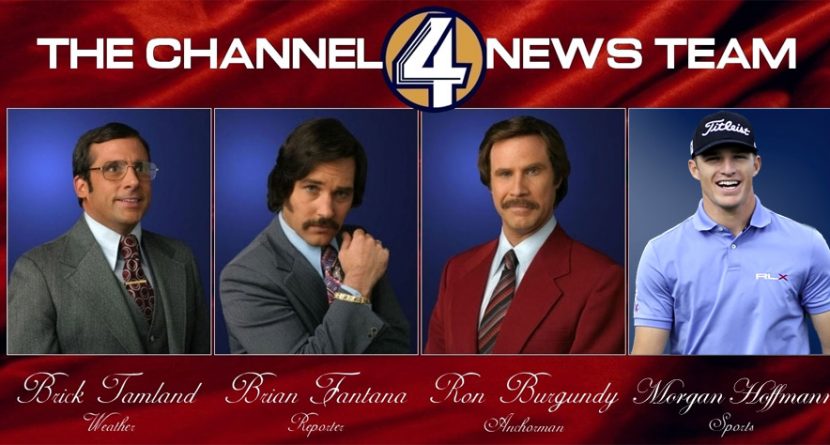 “Anchorman 2” hit theaters last month. You probably noticed because Will Ferrell was everywhere. Like almost literally. Or rather, “Ron Burgundy” was everywhere, like on the “Dan Patrick Show” and in Dodge commercials and in curling commentator booths and on a North Dakota news show set.

Related Link: By the Beard of Zeus! Win a Golf Getaway with Will Ferrell

And now he’s at Torrey Pines, not far from Burgundy’s hometown of San Diego. Well, actually just some of his and his cohorts’ best one-liners are at Torrey Pines – in the form of Morgan Hoffmann’s wedges. The 24-year-old who starred at Oklahoma State has taken personalized wedge stamping to a whole new level.

Hoffman tweeted out this gem prior to the Farmers Insurance Open:

Got my wedges all dialed in for this week @VokeyWedges #sandiego #anchorman pic.twitter.com/lUAlM9Gagu

Those quotes, you may remember, are among the more memorable from the original “Anchorman.” This should refresh your memory:

Did you catch quote No. 6? At the 53-second mark there was this: “Sixty percent of the time, it works every time.”

Now check out this video of Hoffmann and his workout routine. Note what he says at the 40-second mark:

If Hoffmann hasn’t entered Ferrell’s golf getaway contest already, he needs to put down his Anchorman clubs and do so at once.

Other Hot Links:
– TV Preview: Back9Network Original Programming
– By the Beard of Zeus! Win a Golf Getaway with Will Ferrell
– Will Ferrell Gets Rory McIlroy Into ‘Anchorman 2’ Premiere
– 5 Things You Need To Know about Torrey Pines
– John Daly Rocks SpongeBob GolfPants