Mulligan Day: 7 Golfers Who Could Have Used a Mulligan 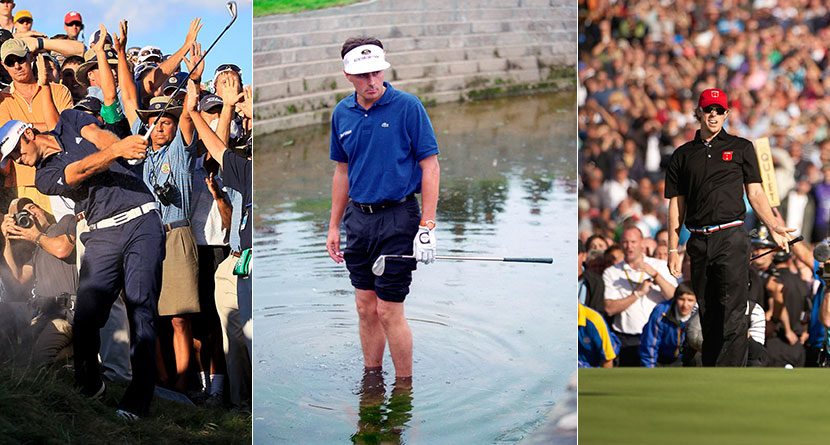 There’s something celebrated each and every day and today, believe it or not, is National Mulligan Day.

Initiated to celebrate the “do-over,” Mulligan Day is near and dear to us golfers. The term, according to the USGA, came from one of three men who share the last name Mulligan. Either David Mulligan, a manager at the Waldorf Astoria Hotel in New York City, John “Buddy” Mulligan, a locker room attendant at New Jersey’s Essex Fells Country Club, or Thomas Mulligan, an Irish aristocrat, was the motivation for the term after they — of course — took a mulligan.

Regardless who spawned the movement, we’re thankful for it — at least once per round, in fact.

To celebrate this joyous occasion, we decided to dig up a list of seven players on tour who could’ve used a mulligan in crucial moments:

Jean Van De Velde at the 1999 British Open
Our list simply can’t begin anywhere but with Van De Velde. You’ll remember his painful finale at the 1999 Open Championship at Carnoustie. Van De Velde, hoping to become the first Frenchman to win the Open in more than 90 years, made a giant mess of the 18th. All he needed to do was make a double bogey or better to win but decided to hit driver off the tee before a miserable recovery and approach and taking off his shoes to hit from the green-side creek before deciding to take a drop. Ultimately, Van De Velde made a triple bogey and gave up the title to Paul Lawrie. He definitely would have benefited from a mulligan on the 18th tee.

Colin Montgomerie at the 2006 U.S. Open
Monty has had a field day at majors on the senior circuit, but he’s among the game’s most notable players to have never won one of the four major championships while on the PGA and European tours. One of his closest calls came at the 2006 U.S. Open at Winged Foot. Shortly after rolling in a long birdie putt, which tied him with leader Phil Mickelson (more on him soon), Monty muffed his approach on 18 and stumbled to a closing double bogey. He surely wishes he could have had that approach back.

Phil Mickelson at the 2006 U.S. Open
Man, this was a memorable major. Geoff Ogilvy would certainly agree. With the lead on the 18th tee, Lefty drifted from the conservative approach that got him to the top of the leaderboard and took out the driver. Of course, the drive went awry — way left — which led to a very unsuccessful second shot, one of a handful of U.S. Open collapses for the legend and the classic quote: “I’m such an idiot.”

Dustin Johnson at the 2010 PGA Championship
A rising star in 2010, Johnson infamously grounded his club in a sandy area that was deemed a bunker. Following his round, he was penalized two strokes, which forced him to miss the playoff between Martin Kaymer and Bubba Watson.

Hunter Mahan at the 2010 Ryder Cup
This one hurt. After a furious American comeback on the final day of play at Celtic Manor, Mahan muffed a chip on the 17th hole during the final match of the day with Graeme McDowell. Needing at least a halve to help the U.S. retain the cup, the chip led to a missed par putt from deep — and a concession — that gave Europe the Ryder Cup win.

Adam Scott at the 2012 British Open
Fortunately for Scott, he redeemed himself the following year at the Masters but his collapse at Royal Lytham & St. Anne’s in 2012 was painful to watch. He led by four with four holes in the final round to play but bogeyed Nos. 15, 16 and 17. Still in the lead, he then went with the driver on 18 and found one of the course’s many pot bunkers. After missing a par putt, Scott had coughed up the title to a surging Ernie Els. If Scott could do it again, he surely would keep the big dog in the bag on the 18th tee.

Billy Horschel at the 2014 Deutsche Bank Championship
Sure, it all worked out for Horschel in 2014 as he went on to win the FedExCup but that race could’ve been over much sooner without the “chunk heard ’round the world,” on the 72nd hole at the Deutsche Bank Championship. Needing a birdie to upend Chris Kirk and win the second leg of the playoffs, Horschel hit a massive chunk, leaving his second shot on the par-5 18th incredibly short of the green.