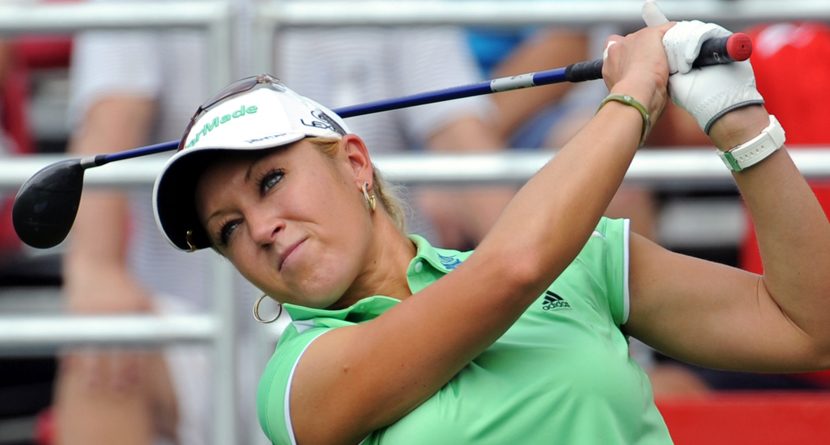 We have some rather sad news to report: Natalie Gulbis is engaged.

The LPGA beauty, who has notched three professional victories (one on the LPGA Tour) but became famous for her good looks, has announced that she will marry Josh Rodarmel, a former Yale quarterback and current owner of athletic wristbands maker Power Balance, later this year.

Gulbis turned professional in 2001 at the age of 18, having played just one year in college (University of Arizona). A few years later, she became a sex symbol. Gulbis released a calendar that contained photos of her in a swimsuit before the 2004 U.S. Open, and also posed for men’s magazine FHM that year. TV gigs followed, including The Natalie Gulbis Show and appearances on The Price is Right, CSI: Crime Scene Investigation, and Celebrity Apprentice.

Through it all, Gulbis developed a cult following because of her good looks and bubbly personality.

The news of her engagement is sure to break the hearts of many young golfers hoping to someday be “Mr. Natalie Gulbis.”

We’re not sure if her impending wedding will affect her modeling life, but we’ll always have her Sports Illustrated body painting photo shoot to watch.

And for those of you who are into cars, we have this video of Gulbis doing donuts in a Lexus LFA.

But seriously, we wish Gulbis and Mr. Natalie Gulbis the best of luck.