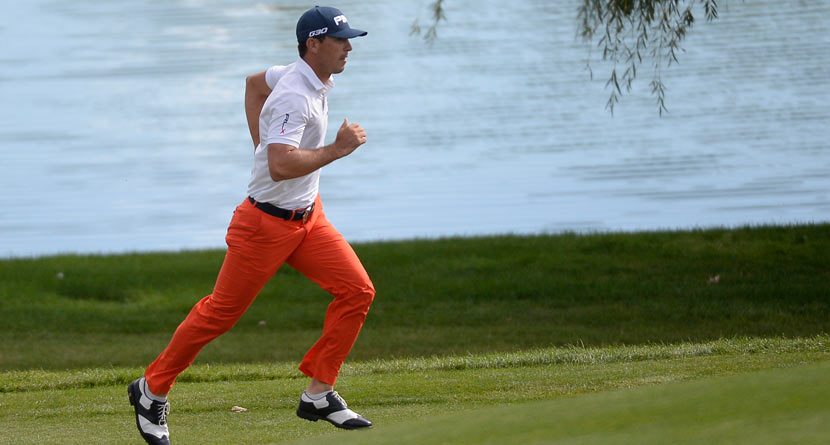 On Sunday at the BMW Championship, Billy Horschel was in control of everything coming up the 18th hole — except maybe his bladder. What should’ve been a triumphant walk up the final fairway with raucous applause in the background turned into a sprint to the port-o-potty.

I guess when nature calls you have to answer, right?

As the Internet often does, it made sure to chronicle this in the best way possible — funny tweets:

no one has ever had to pee more than billy horschel on the 18th at the BMW championship. just hit his shot and then sprinted away at 100mph

I think the best part of the BMW Championship was watching Billy Horschel run to the bathroom. Too funny loved it!

Billy Horschel’s mad dash to the bathroom after teeing off of 18 = my daily struggle. #bladderthesizeofanacorn

Billy Horschel puts 2nd shot on the 18th green, moments from winning the tournament…takes off on a dead sprint to the bathroom. #awesome

Billy Horschel has been telling me for two years he can run a sub-4.7 40-yard-dash. Still say no way — unless he’s racing to a porta-potty.

Potty breaks and one fat approach shot notwithstanding, Horschel’s play these last two weeks have made many question whether Horschel should’ve been taken for the Ryder Cup. Horschel, who said he’d cherish the opportunity and wanted to take on Ian Poulter head-to-head, was not one of Tom Watson’s captain’s picks:

All jokes aside, it really is a bummer Billy Horschel isn’t going to be on the Ryder Cup team. Event and guy were made for each other.

What? @BillyHo_Golf won? Boy, I am going to be insufferable at work tomorrow. #golfstradamaus #HorschelForRyderCup

I don’t know that Horschel really cares, though. He’s one of the coolest guys on tour and should be in contention for plenty of Ryder Cup teams to come. Horschel still has plenty of be happy about — his win at the BMW guarantees he’ll control his own destiny at the Tour Championship next week in East Lake.

A win there, and Billy Ho could be laughing all the way to the bank.