Need More Bubba Watson? He Now Has His Own Show 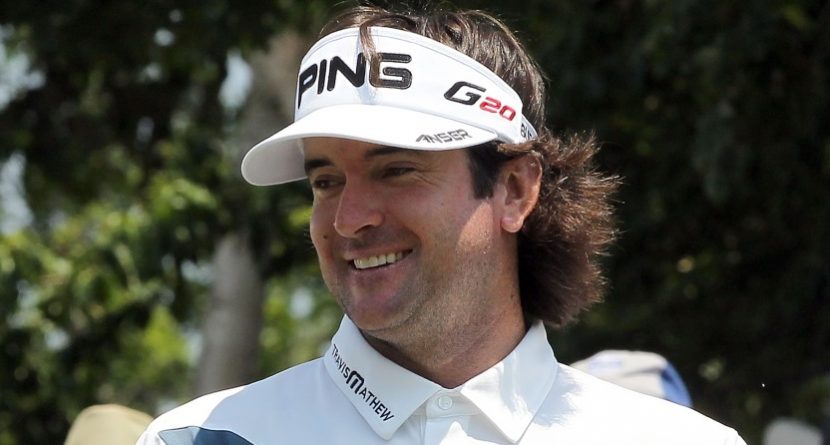 It’s often said that Miguel Angel Jimenez is the most interesting golfer in the world. That’s largely because of his resemblance to the Dos Equis “Most Interesting Man In The World” character, and also because Jimenez ardently drinks wine, smokes cigars and is more limber than many competitors half his age.

But other than that, we don’t know much about the man. He’s not on Twitter, he doesn’t post YouTube videos of himself, and he doesn’t speak the most comprehensible English.

You know who does do all of that? Bubba Watson, your reigning Masters champion. And for that, Watson may just be the true most interesting golfer in the world. Good pal Rickie Fowler can probably give him a run for his money on that, but let’s side with the two-time major winner.

So then, it’s only fitting that the most interesting golfer in the world now has his own show. On Monday night during “BubbaTalk Live” (where Watson sits in front of a webcam and answers Twitter questions from fans for about 15-20 minutes), Watson announced that a new web series called “The Bubba Watson Show” would soon be out. Here’s the first episode:

Watson also released a trailer for the show:

He expects there to be eight to 10 videos in the series, with each one ranging from five to 10 minutes long. Watson plans to post a new one every week.

“We’ve been videotaping my life,” he said on “BubbaTalk Live.” “We’ve been videotaping a lot of things that happened in the end of last year – the outings I’ve had to do, some of the charity stuff I’ve done. We videotaped different tournaments I went to, like Thailand, and so we wanted to make a web series.”

“There was a camera crew that went with me; they just traveled with me so we could air this. Let people see what goes on in my world, at each tournament, what I like to do,” Watson said, adding, “There’s a lot going on that people don’t see behind closed doors. It’s not just golf; there’s a lot of things that go on.”

It should be interesting.