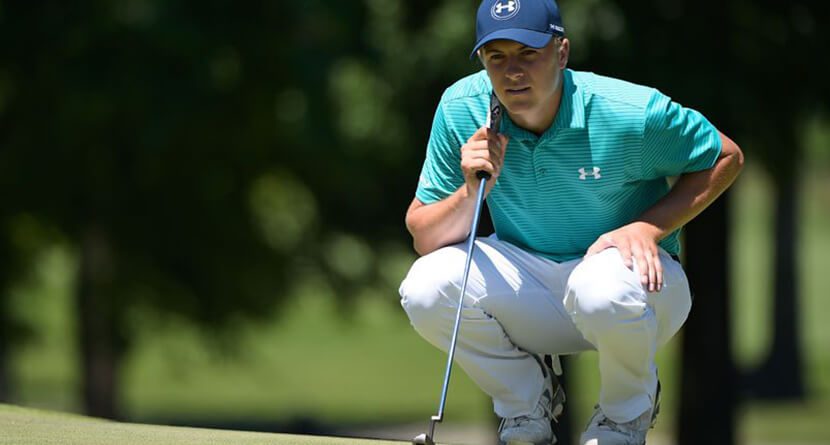 Two wins, a runner-up in a major, five top-10s and 10 top-25s is a decent career for a bunch of guys who find their way onto the PGA Tour. However, for Jordan Spieth, that’s a relatively disappointing season. That’s insane.

As it turns out, Spieth may have turned a corner on Thursday in Akron as he grinded — and we mean grinded — his way to a 2-under par 68 at the WGC-Bridgestone Invitational at Firestone Country Club. Hitting just six fairways and seven greens, Spieth got up-and-down for par eight times. How did he do that? A solid short game and needing just 21 putts (!).

“That would go up there with the best putting rounds of my life,” Spieth said, according to Golf.com’s Gary Van Sickle. “But hey, my chipping is on, my short game is on. I’m pretty pleased. It’s one of the best — one of the happiest 2-unders I’ve ever shot. I wasn’t supposed to shoot 2 under today. I kind of wish we’d kept on playing, even though I felt so poor most of the round.


“Once I find something that clicks, I can run with it. It’s the same feeling I had the last round or so at the U.S. Open and in practice last week, and I’ve really been searching. This is kind of a phase that everyone goes through — a down phase in ball-striking where you’re just trying to find something that frees you up to swing through the ball. I’m searching for something that isn’t far off, that’s real simple, that feels like I’m more compact in my swing . It’s almost there and when it clicks, we’re definitely in business the way my short game is on right now.”

After playing the first 14 holes in 2-over par, Spieth birdied in from the 15th hole to post 2-under par. He sits in a four-way tie for fifth place with Rickie Fowler, Charley Hoffman and Anirban Lahiri, four strokes behind first-round leader William McGirt. Jason Day, Emiliano Grillo and Jimmy Walker are in second place, three shots back.

Here are the highlights from the first round.