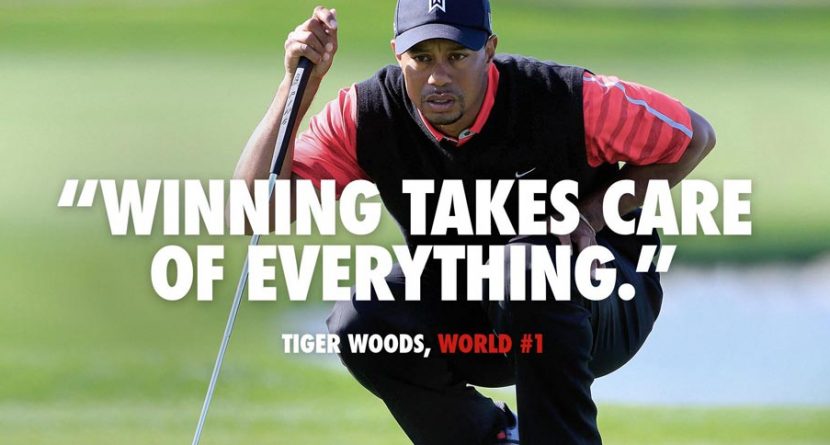 Nike took a lot of heat on Tuesday for an ad it released on Facebook in celebration of Tiger Woods’ 77th PGA Tour win at the Arnold Palmer Invitational.

The Swoosh made a point of emphasizing Woods’ run of six wins in his last 20 PGA Tour starts leading to Woods again ascending to No. 1 in the Official World Golf Ranking for the first time since Halloween 2010.

The spot pictures Woods in a crouch, reading a putt at Bay Hill, with the attributed quote, “Winning takes care of everything.”

Some critics were unhappy Nike would glorify Woods with a quote that, taken in a certain context, might seem to shine a positive light on his personal failings and the downfall of his marriage.

The backlash makes little sense, however. The quote is about getting back to the top spot in golf. It has nothing to do with Elin, Lindsey Vonn, cheating or a fire hydrant. And if anyone thinks this is the last time Tiger’s going to win a golf tournament, or be No. 1 in the world, then they’re sorely mistaken. The guy is back.

So what’s Nike to do? Not acknowledge when the guy wins? Not promote his accomplishments but give kudos to the erstwhile world No. 1, Rory McIlroy?

Seeing as though Woods has said winning takes care of everything for as long as he has been winning golf tournaments, what about this old mainstay quote instead? That’s kind of a dud. Maybe this one instead? That’s easy to take out of context.

Maybe something sappy that paints Woods as a man with real feelings and emotions, despite what he did to his ex-wife and children? He really said that on Monday after winning. It doesn’t make for a catchy ad about winning and triumph, but it is an important quote from the transcript.

Or, finally, Nike could have gone for a hilarious spoof. (Again, he really said this, albeit sarcastically.)