NHL Players Beat Golfers In Round 2 Of Ball Hockey 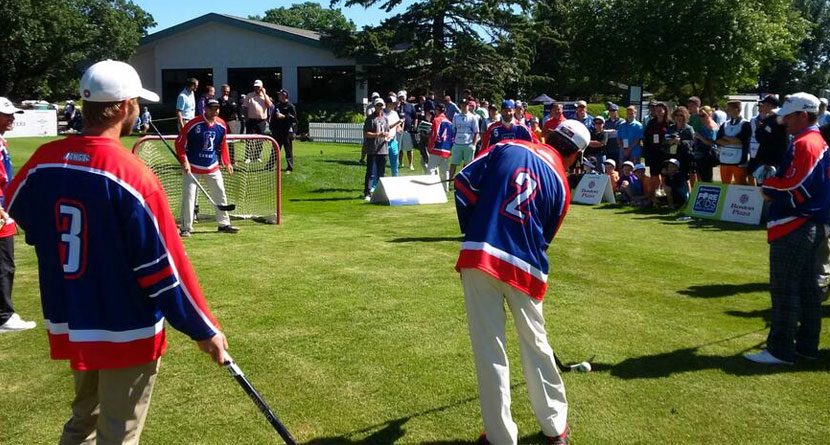 The PGA Tour Canada’s Players Cup may have one of the best pre-tournament events in golf (aside from the Masters Par-3 Contest, of course). It’s a game of ball hockey featuring two teams of professional athletes … but one team is a squad of golfers, and the other hockey players.

At the 2013 Players Cup, the PGA Tour Canada team pulled off the “miracle on grass,” upsetting the team of NHL players featuring Jonathan Toews and Zach Bogosian. And so the rivalry began.

A rematch a year in the making. The stage is set. The Miracle On Grass 2. pic.twitter.com/1lQmj8IGyz

This year, the NHL team was prepared. They held a draft combine last week where players showed off their skills in stickhandling, accuracy and driving distance. I’m assuming this helped them select the most worthy players for the team, but who knows.

Tuesday was the day of the rematch, and it didn’t disappoint. The NHL team redeemed itself with a win in a shootout after the two teams were tied at four after regulation.

1-1 midway through the first of two periods. #MiracleOnGrass2

4-4 tie after regulation. Off to the shoot out. #MiracleOnGrass2

Josh Green put home the game winner to give the NHL squad its much needed redemption. With the series knotted up at one apiece, the 2015 rubber match should have plenty of bragging rights riding on it.

Other Hot Links:
– Back9Network Launches On DIRECTV Sept. 29
– Phil Mickelson Flops Again
– The Fringe: Despite Issues, McIlroy ‘Would Love’ Playing With G-Mac
– Is Rory McIlroy Dating A Model?
– Golf Pro Saves Man From Sinking Minivan In Water Hazard
– Grin and Bear It: Baylor QB Throws Club At Simulator
– Factory Worker Qualifies For The Open With Borrowed Clubs
– The Dufners Had A Better Fourth of July Than You