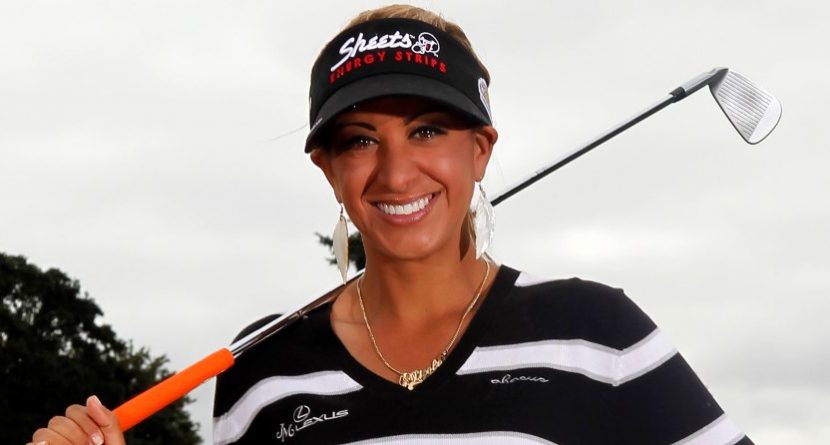 I could tell you about the first time I met Nicole Hage at the PGA Show in Orlando a couple of years back, but it was a quick introduction, and when you’re living off of cheese crackers and vodka for four days straight, nothing seems that meaningful.

Instead, I’ll tell you about the first time I started working with Nicole Hage, who became a player ambassador for Back9Network last year. We were at the AT&T Pebble Beach National Pro-Am. She hands me this giant, glittery goodie bag of Keratin Complex products and right away I knew there was more to this girl than LPGA. Not only did she know that the way to my heart was through my hair, but unlike most professional athletes, she wasn’t thinking about what we could do for her. She was thinking about what she could do for us. That became more clear the day before the tournament. Here we were on the practice range at Pebble Beach, and up walks Nicole, all confidence in her peplum dress and bright magenta heels, with this big smile and those white teeth. All the anxiety I had about getting enough interviews, making sure I wasn’t annoying anyone, or violating any PGA rules immediately melted away. Everyone on the range knew who she was. Everyone came up to give her a big hug. And that’s when I realized something about Nicole: She has a rare quality that separates her from a lot of professional athletes, especially golfers. She makes you feel at home. I knew it from the moment I met her three years ago.

That’s why it makes sense to me that Nicole is moving on from professional golf. But that doesn’t mean her decision wasn’t agonizing, or any less brave.

Golf has been a part of her life for the last 25 years. “I started going to the range with my dad when I  was three years old. He used to golf for fun, and if he would try and sneak away to the range without me, I would start screaming (my parents told me),” she says. “When I was 7, I went to my first LPGA event and was hooked.”

Little did she know that 16 years later, that’s exactly where she would find herself. After getting a full scholarship as the No. 2 junior in the country, Nicole would attend Auburn University and leave as a four-time All-American, four-time All-SEC Player of the Year, and SEC Freshman of the Year. But for all that golf has given her — the friendships, the discipline, the hard work, the trips to Australia, New Zealand, Scotland, Mexico, Japan, the Bahamas, and every state in the U.S. — the game is a grind for these young women. Plain and simple. “The pressure to have to play well is intense for everyone, but I felt if you weren’t a top-70 player, it was even more intense because you don’t have the opportunity to play in every single event. So you better make what (tournaments) you do get into count, because you may not get many more chances,” Nicole says.

“And with the lack of chances means lack of chances to earn money. Not only are you paying to play in every event, travel to it, have a caddie and every other expense, you also better make the cut and finish somewhere in the top 25 to end up in the positives (financially).”

But for all the pressure, life-consuming dedication, passion and discipline that goes into playing a professional sport like golf; living out of a suitcase for weeks and months at a time; sacrificing relationships and a normal life for something you love — these ladies do it all without a fan base comparable to their male counterparts. And that can be exhausting. Just ask Anna Rawson, Sophie Gustafson, Amanda Blumenherst, Taylor Coutu and Helen Alfredssen, who all recently retired from the tour.

It wasn’t until the Pure Silk Bahamas LPGA Classic that Nicole realized she had to make a decision.

“The week after the Bahamas event, I woke up one morning and didn’t want to go to practice. I knew I was done and ready to move on … I had done things differently than most girls on tour and didn’t really have an agent. I had, at one point, a dozen corporate sponsors and had closed all the deals myself. Networking, meeting people, and sales were things I knew I was good at and really enjoyed,” she says.

And so at age 28 — after 21 years of devoting her whole life to something as specific as being a professional golfer — Nicole was faced with the idea of starting a career in a field where she would likely have little experience, but a ton of passion and heart. Would that be enough?

She asked herself that question for a month and a half, looking for jobs away from the tour to no avail.

“My dad suggested I go and play the Waterloo Canada event and Toledo until I figured things out,” she said. “So I went and brought my brother to caddie, and ended up qualifying for the British Open, which was at St. Andrews during my birthday. So I decided that that would be my last event and my dad would come with me. I didn’t make the cut, but stuck it to three feet on 18 and birdied my last hole, which was the best way to end things. My dad and one of my best friends, Paula Creamer, were there watching.” For Nicole, it was the cap to a career as a pro, one last nod to a life on tour. One that taught her more than she could hope to learn before the age of 30. From now on, she won’t think of herself as Nicole the Golfer. Now, she is just Nicole. And today that sounds pretty good.

Last month, she moved to Dallas to join Clubcorp as a membership relations assistant at one of the largest golf clubs in the city. She’s settling in to her new life, in her own apartment, and her suitcase is finally unpacked.

“I feel so at peace. After my first two weeks I am loving what I’m doing. All my strengths are being used and I feel successful,” she says.

Congratulations, Nicole. And by the way, the Keratin Complex rocks.