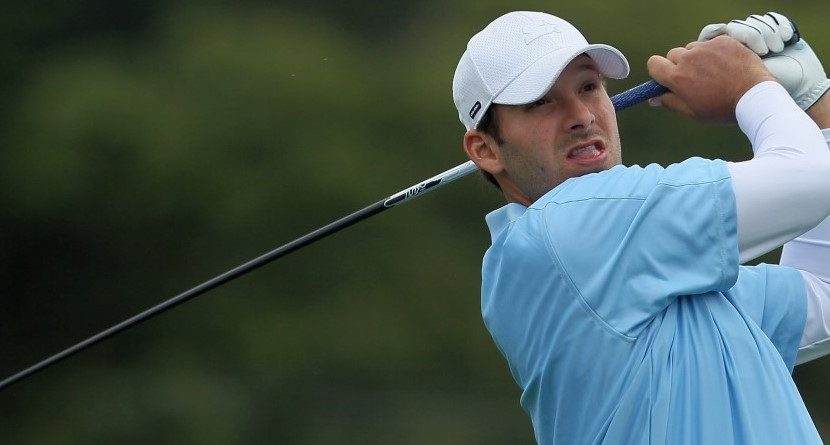 The Dallas Cowboys’ quarterback is not on the player list for the 2013 edition, and ESPNDallas.com is reporting that he won’t make his annual attempt to qualify for the U.S. Open. He’s already skipped the Adams Golf Pro/Scratch, a Dallas event he regularly attends, and the Azalea Invitational in Charleston, S.C., a top amateur tourney.

Why the offseason change for Romo, arguably the best golfer among active non-golf athletes? It could be the six-year, $108 million contract extension he signed in March, making him the highest-paid Cowboy of all time. Maybe he figured that with that much money, he should concentrate more on his real job, in which he’s won one playoff game, and it was way back in 2009. Romo now averages $18 million per year, or nearly $1 million per interception he threw in 2012 (he tossed 19).

Or perhaps it’s because he’s the father of a 1-year-old? His son, Hawkins, was born in April 2012, so you’d think last summer was the one in which he should avoid golf. You know, so he could help his wife, Candice, with the newborn. Maybe Romo fumbled up his priorities last summer, so he’s trying to get out of the dog house now.

Regardless, the celebrities in Tahoe will enjoy having a better chance to win. Romo has never won the American Century Championship, but he’s finished runner-up twice (2009, 2011) and has been in the top five every year since 2008. Romo has played every year since ’07.

However, former NHL center Dan Quinn, the defending champ, isn’t on the list either, so maybe there’s still time to enter. But one man that is on the list raises an eyebrow: Miles Austin. If Romo is indeed committing himself to improving on the football field, shouldn’t his No. 2 receiver be there with him?

Next page: TPC Sawgrass: What It Takes To Win