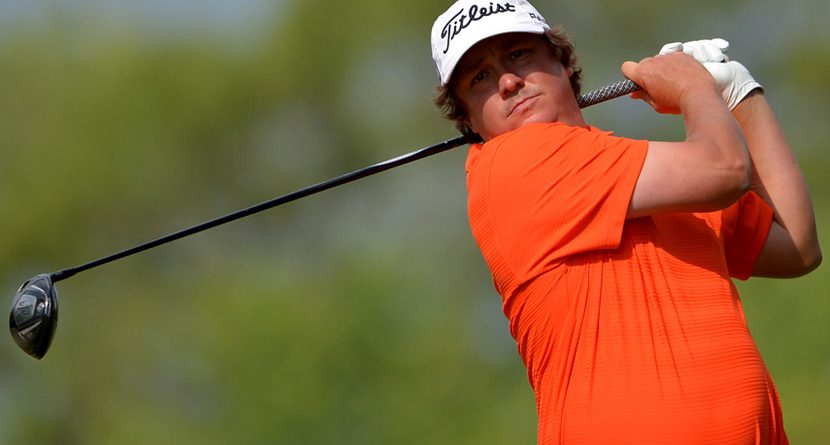 Billy Horschel doesn’t understand what all the fuss is about.

While Zach Johnson was expressing his “disdain” for the Merion Golf Club’s East Course, and Tiger Woods was nursing a sore elbow aggravated when his club struggled through the thick rough, Horschel was out hitting every single green in regulation. He’s the first U.S. Open golfer since 1992 to accomplish such a feat.

The 26-year-old carded a 3-under 67 on Friday to earn a share of the lead with Phil Mickelson at 1-under par. Horschel shot a 72 Thursday and Mickelson recorded the same 2-over on Friday.

That makes them the only two gentlemen under par so far at Merion. So maybe it’s safe to admit: Merion is a short, small course, but it’s not easy.

Dufner’s Shot Gets Wet, His Club Too
Tough leads to frustrating. So irritated was Jason Dufner on No. 4 that, after sending his approach shot into one of the few water hazards on the course, he launched his club into the creek as well. Well, he took his drop, chipped onto the green, then tossed the offender into the water. Realizing he might need it later, he begrudgingly fished the club out… then threw it in the general direction of his caddie.

Why Players Are Teeing Off At No. 11
So cramped is Merion that nearby houses are being used for tournament services. One backyard is housing the players’ locker room. Another is the volunteer hospitality tent. Yet another is serving as the site for media interviews after players complete their round.

And has a major golf tournament ever sent players to the 11th tee box to commence their round, if they’re scheduled to play the back nine first? That’s where players are starting at Merion, possibly because the Murphy family decided not to hand their property over to the USGA. They take up space near the 10th tee, the space needed for spectators to watch the typical tee-off hole for the back nine.

Mickelson’s Play Interrupted By Groundhog
Because he’s sharing the lead heading into the weekend, we assume Mickelson isn’t finding Merion as tough as others. He missed some practice time this week so he could attend his daughter’s eighth-grade graduation, but put in plenty of time at the course before leaving. He couldn’t have expected his visitor on the sixth hole, however.

As he stood in the fairway preparing for an approach shot, a groundhog scurried across the open land to the cheers of fans. Obvious “Caddyshack” jokes ensued, on TV and Twitter (even though the varmint in the movie was a gopher). Yet with the groundhog and Mickelson and the U.S. Open, wouldn’t wisecracks from a different movie be more appropriate? In “Groundhog Day,” the same day keeps happening over and over. And in this event, Mickelson keeps finishing second over and over.