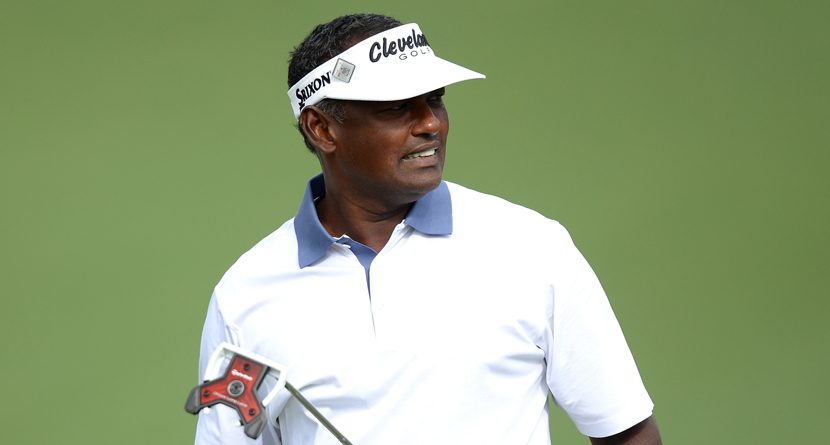 When Baltimore Ravens linebacker Ray Lewis was alleged to have taken deer antler spray, which contains a banned substance, in the days leading up to the Super Bowl earlier this year, another athlete came out and admitted to using the stuff: golfer Vijay Singh.

The “Big Fijian” told Sports Illustrated he paid Sports With Alternatives to Steroids $9,000 for the spray, hologram chips and other products last November. When the spray arrived at his home, Singh said he did not see anything in the list of ingredients that was banned.

But when the story came out in January that he used the spray, it was discovered it did contain a banned substance: IGF-1.

Singh contacted the PGA Tour and confessed to using the product, and he was provisionally sanctioned, which he appealed. On Tuesday at the Wells Fargo Championship in Charlotte, N.C., PGA Tour commissioner Tim Finchum said Singh had been cleared of any wrongdoing.

The World Anti-Doping Agency (WADA) said an athlete can only be punished for using IGF-1 if a positive test occurs. Singh passed the test for it. Just what is deer antler spray? First off, it must be said that deer antlers are made of some of the fastest growing tissue on the planet. The extract that comes from them is essentially a growth hormone. In other words, it supposedly speeds up muscle growth.

In golf, we suppose it could help a player hit the ball longer off the tee thanks to the added muscle. But as we all know, being a good golfer isn’t always about being the most muscular player (see Tim Herron).

If Singh were a football player and was drafted by the New England Patriots as a tight end, there might be some benefits. We wonder what would happen if he were to collide with Lewis for a block. Would they square off like two elk and fight using their antlers (helmets, in this case)?

When the story broke earlier this year, Bubba Watson was not impressed with anyone who chose to use deer antler spray.

“It’s sad that people live and die by their sport and they have to, I guess, cheat and go around it and try to better themselves with deer antler spray,” Watson told the Associated Press. “I’m not just going to take something and ask questions later. I’m not going to take deer antler spray and find out what it is later. … I think we should check them for mental problems if they’re taking deer antler spray. That’s kind of weird.”