Oh, the Places Golf’s Majors Trophies Have Been 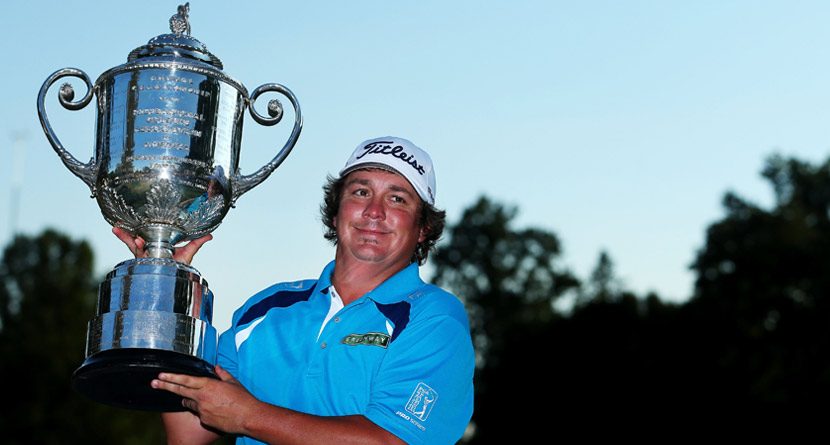 Three majors down, one to go. That means the PGA Championship is on deck. It tees off Thursday at Valhalla Golf Club in Louisville, Ky.

At stake, of course, is a major title, which can define a career for many golfers. And $1.8 million goes to the victor, which can certainly make a season. But winners of each major also get a nice little trophy.

The size, shape and rules surrounding each award vary depending on the tournament, but one thing is standard across the board: Golfers partake in some interesting activities when the trophy is in their possession.

What exactly do victors do with golf’s major championship prizes? And how long have these souvenirs been around? We did some digging and uncovered some great stories. Here’s a rundown of each trophy’s history and some of the events that have taken place with them: Most cherished to winners of the Masters is likely the iconic green jacket. But did you know they also receive a trophy?

The green jacket’s popularity outweighs the Masters trophy partly due to the fact that champions only began receiving replica trophies in 1993. Previously, their name was just engraved on a band of silver affixed to the permanent Masters Trophy, which was unveiled in 1961. The trophy depicts the Augusta National clubhouse, was built in England, is made up of more than 900 pieces of silver, and rests on a pedestal on which the name of each winner and runner-up is engraved. At 3.5 feet in diameter and 2 feet tall, it never leaves the Augusta National property.

The replicas that winners now receive are a smaller version of the permanent trophy. Since they look like a miniature house, not nearly as much fun has been had with these as compared to the other majors’ prizes. Tiger Woods has earned four, but they just sit on display at his home in Florida. Jack Nicklaus would have six replicas, but each of his titles came before 1993.

Masters winners also receive a gold medal (3.4 inches in diameter and weighing 2.3 ounces) that portrays a view of the Founders Circle in front of the clubhouse. But the green jacket is what every golfer covets the most.

It first found its way onto the winner in 1949, and each champion can do with it as he pleases for one year. But after that, they are expected to leave their jacket, which has their name stitched on the inside, at Augusta to be worn only during their visits to the property. Of course, that rule hasn’t always been followed.

After winning the Masters in 1961, Gary Player took his jacket home to South Africa. While he returned to defend his title in ’62, the coat stayed home. Masters chairman Clifford Roberts asked Player about his green jacket’s whereabouts, to which Player reportedly replied, “If you want it, why don’t you come and fetch it?” Apparently they came to an agreement that Player could keep it in South Africa if he promised to not wear it in public. Some reports have Player eventually selling the jacket along with other memorabilia, while others say that jacket is now on display at the World Golf Hall of Fame. A silver jug, the U.S. Open trophy dates back to 1895, when it was presented to Horace Rawlins. He displayed it at his home club until the next year, starting a tradition that has endured ever since.

However, that actual trophy has not lived on. It was destroyed in a fire at Lloyd Mangrum’s club after he won the title in 1946, which came after the trophy wasn’t handed out at all because the tournament was canceled from 1942-45 for World War II (it was also not played in 1917-18 for World War I). The USGA created a replica in time for the 1947 tournament, and that trophy was passed to the champ every year until 1986, when the association decided to permanently display it at the USGA Museum. The same full-scale replica, with each winner’s name engraved on the base, has been handed out annually ever since, and the victors maintain possession for a year before being given a replica to keep.

At least it’s assumed the golfer will maintain possession. After his historic win in 2011, Rory McIlroy hoped to show off the trophy at the rest of his tournaments that year. So he had it shipped to Shanghai prior to the Shanghai Masters, at which McIlroy was asked if the U.S. Open trophy was with him. “Well, not exactly,” he replied. That’s because it arrived at the course, but nobody was there to receive it, so the trophy was sent back to Chinese customs officials. They didn’t want to relinquish it, the whole thing became an ordeal, and many people got involved, including the USGA. But everything was eventually sorted out in time for McIlroy to hand it back over in 2012.

But not before he tweeted pictures of him drinking beer out of the trophy. Geoff Ogilvy did the same after his surprising win in 2006.

The U.S. Open trophy is currently in the hands of Martin Kaymer, who earned it after Justin Rose returned it. Rose took it back to England with him to get his name engraved (players are responsible for that task on their own). Later, he revealed that his son, Leo, ate ice cream out of the chalice before he could even have a drink out of it. But eventually Rose said he was able to pour in five bottles of champagne. He didn’t say how much of that he then drank. The claret jug that comes with the Open Championship title probably has the most tales to tell, but here’s a quick rundown: The first claret jug was presented in 1873, but since 1927, a replica has been handed out. That’s engraved with the winner’s name each year (done before being handed to the player), and from there, it is in that golfer’s hands until he returns to the site of the next year’s Open Championship. Upon handing it over, the player receives his own replica to keep forever.

Many ounces of beer have been poured in and drank out of the jug (Padraig Harrington, Stewart Cink), as has champagne (Greg Norman), iced tea (Justin Leonard), Cristal (Todd Hamilton), whiskey (Harrington again), and Jagermeister (Rory McIlroy). Some won’t tell what they put in it (Tiger Woods), while others opted to keep the jug as clean as it was when they received it (Darren Clarke). Nick Faldo once took a selfie with it and an elephant, and McIlroy took his own selfie not long after he walked off the course. Following the Open Championship in the run of majors is the PGA Championship every August. Victors there receive the Wanamaker Trophy, so named in honor of Rodman Wanamaker, who is credited with forming the PGA of America and its annual championship. The silver cup is one of the heaviest trophies around, weighing in at 27 pounds.

The first PGA Championship was staged in 1916, as Wanamaker donated the trophy and the $2,580 purse. The jug was awarded to the tournament’s winner each year until 1928, when four-time defending champ Walter Hagen didn’t give it back. In fact, he couldn’t give it back because he lost it. A few different stories have been told, with the most popular being that he left it in a cab while out celebrating one of his wins. He supposedly asked the driver to take it to his hotel; it never arrived.

However, it turned up in 1930 in the basement of a Detroit warehouse for L.A. Young & Company. Interestingly, that was the company that made the Walter Hagen line of golf clubs. In its stead, a replica was crafted by the PGA of America, and that’s the prize now handed out. The original trophy sits at the PGA Historical Center in Port St. Lucie, Fla.

Every winner takes possession of the Wanamaker Trophy for one year, then is presented with a half-sized replica to keep. Should a golfer want an actual-sized replica, it’ll cost them $35,000. The true value, however, may be even more. The trophy given to Al Geiberger for his 1966 triumph sold at an auction reportedly for nearly $55,000.

Priceless are the stories it can tell. The Wanamaker Trophy became so hot while waiting to be handed to Jack Nicklaus in 1963 that the Golden Bear needed a towel to hold the cup. Not surprisingly, John Daly chugged beer from it after his out-of-nowhere win in 1991. Keegan Bradley did the same 20 years later. Before giving it back in 2003, Rich Beem toted around his newborn baby inside.

The current holder of the Wanamaker, Jason Dufner has had plenty of fun with the trophy. He and some friends ate Taco Bell out of it, he slept with it, and he placed his new puppy, Louie, in it.