On Amateurism and Success 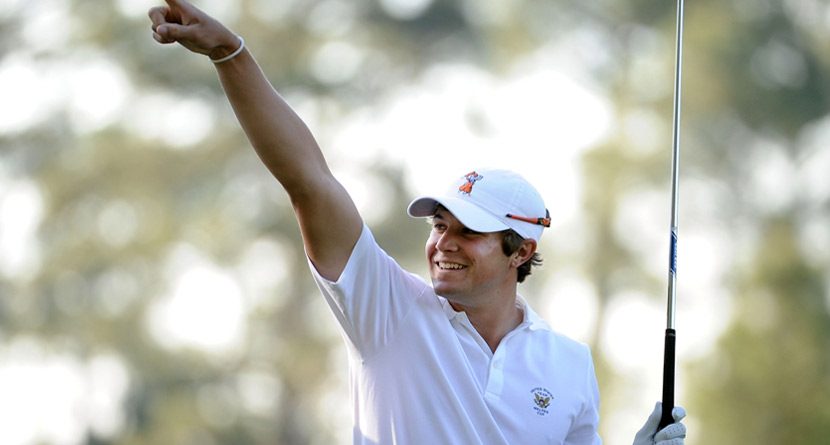 The Joburg Open, held last week at Royal Johannesburg & Kensington Golf Club, possessed a field every bit as thin as the alpen air in which it was played.

On a course stretched to nearly 7,700 yards – how else to accommodate the threat of those artillery round carries? – the cream of the South African circuit met a European Tour severely depleted by its transcontinental hike from the Emirates to contest a tournament worth €1.3 million, or scarcely a quarter of the prize money on offer at Pebble Beach. Former Masters champion Charl Schwartzel supplied a flicker of star power, but in truth, this was a peripheral event populated by journeymen and tyros. You could be forgiven for not having paid attention.

In the unlikely event that you were, however, it would have still been possible to miss the name of Peter Uihlein amongst those crowding the upper reaches of the leaderboard. The former Walker Cup star, U.S. Amateur champion and Acushnet scion began the week with a promising 65, but by Sunday had slipped from the fringes of contention into a tie for 19th place. An opportunity lost, perhaps, but a performance still worth nearly €15,000: enough to make it his most lucrative outing since an unremarkable showing at the 2011 Open Championship.

Once the subject of “Sports Illustrated” features and special treatment from sportscasters and tournament officials alike, Uihlein has spent the 18 months since that appearance at Royal St. George’s toiling in something close to anonymity. After an initial bid for playing status on the European Tour failed that autumn, he spent the following season piecing together a promising campaign on the continent’s second tier, only to see it end agonisingly short of graduation. A third body blow was suffered at the tail-end of November, when the 23-year-old missed the four-round cut at the European Tour’s annual Qualifying Tournament.

The cumulative effect of these disappointments was to ensure he ended the year where he began it, sandwiched in mini-tour limbo between competing schedules and the vague promise of special exemptions.

As a youngster, Uihelin had access to all the coaching, equipment and guidance he could want. And even now, having left behind the womb-like security of an athletic scholarship at Oklahoma State University, he remains insulated from the threat of full-blown professional failure. The graphs and projections plotting his path to PGA Tour stardom remain, as yet, unthreatened by the exhaustion of material resources or quiet insistence of Time. Chubby Chandler and Butch Harmon, both members of his support staff, won’t be jumping ship anytime soon.

All of this isn’t meant to diminish Uihlein’s considerable talent or the magnitude of his achievements. As an amateur, he marked himself out as a particularly fearsome combination of athlete savant and course manager.

Like a Dustin Johnson capable of abstract thought, his game was a symphony of long levers, brute hand-eye coordination and the robotic contemplation of odds.

Chance alone is incapable of earning a 4-0 Walker Cup record.

And though a cocktail party of patrons and benefactors has cleared his path, it remains for Uihlein alone to walk it. Always unforgiving, competitive golf becomes that bit more so in the absence of blameless misfortune, the tricks of circumstance that soften the blow of failure. His plight is not to be envied.

No, what’s of far more interest than the many ways in which Uihlein stands apart from his peers is the manner in which his development conforms to what is fast becoming a template – perhaps the only one – for professional success. His upbringing was privileged – what aspirant golfer can boast of barbecues with Davis Love or listening in to conference calls with Tiger Woods? – but its marshalling of resources was no guarantee of success.

Uihlein was enrolled in a private sports academy from the age of 10. His parents lived apart for the duration of his education in the hope he would mature into a world-beating adult. Such familial dedication from an early age, such concerted professionalism, has long been a feature of sports like tennis or soccer, but it’s relatively new to golf. Though it may be disconcerting to think of families gambling a decade on a “gifted” child, such a proposition needn’t be considered especially insidious in and of itself. Far more troubling, and this applies especially to golf, is the way in the which this tunnel vision doesn’t just require the investment of parental time and energy, but money, and lots of it. Coaching, travel, equipment, education: the grooming of a champion golfer has never been so expensive.

According to a 2011 article in the Wall Street Journal, the number of registered junior golfers in the United States between the ages of six and 17 declined by 1.1 million (29 percent) in the four years between 2005 and 2009. Of those who remained, nearly half came from households with average annual incomes over $100,000, as opposed to the mere 17 percent who came from households earning less than half that. These statistics can’t account for generational prejudices, of course, or the whens and whys of individual participation, but they do offer a blurry snapshot of a sport beating a swift retreat into the more monied enclaves of suburban America.

What’s more, the transition to life as a bill-paying professional has become more fraught of late, beset by long-term commitments and expenses. For every Russell Henley or Rickie Fowler who graduates from collegiate competition a close approximation of the finished article, there are literally dozens of prospects condemned to years of minor-league serfdom. Now that the PGA Tour has eliminated Q-school as a gateway to the bigtime, its middle passage to exempt status, qualification has largely been reduced to a long-term project. There’s no longer a place for the club championship dreamer or part-time pro. Relentless competition, preparation, plodding consistency: these have emerged the only currencies worth hoarding.

It might look an exacting test of faith, the perfect barometer by which to gauge the willpower and dedication of this next, ultra-competitive generation, but six days a week in diligent study on the range or in the gym comes at a cost; there’s always some poor sap in the background passing billfolds to a landlord or coach.

In this sense, Uihlein is less an anomaly than a harbinger of things to come. He’s charting a path that will, in the years to come, become a crowded and bustling thoroughfare. That said, his destiny, for all the man hours and many thousands of dollars invested, remains unfulfilled; a fact, I suppose, that only underscores the grinding cruelty of this most demanding lottery.