On Natural Athletes and Self-Loathing Pros 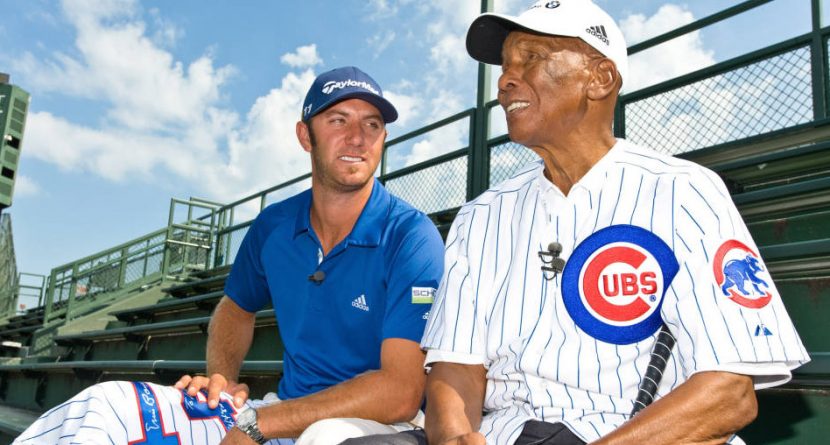 Dustin Johnson was the first PGA Tour winner of the 2013 season, leveraging his easygoing nature to maximum effect on the gale-swept hills of Kapalua’s Plantation Course.

Seemingly immune to the frustration and anxiety that percolates through the field during those occasional weekends of weather delays and shifting forecasts, the South Carolinan’s mastery of the 54-hole tournament is unparalleled. He’s nabbed three in his half-dozen years as a professional.

The inclement weather may well have put him at a psychological advantage. DJ doesn’t really do introspection, you see, let alone that of the slightly pathetic variety – but the heavy lifting was done by those long levers of his, cranked into improbable positions with every languid sweep of the club. A big, rolling park of a golf course, Kapalua’s like a nature reserve for the prodigious hitter; a place where Dustin can roam free, booming drivers into the hazy distance all day long. His performances on Monday and Tuesday may have been decidedly one-note, unremittingly muscular, but they were all the more insistent because of it.

Commentators and pundits were won over and filled a great deal of air-time in frenzied celebration of the champion-elect’s ballstriking. There was talk of swing planes and flexibility, bowed wrists and smash factors. Most often, however, the subject was DJ’s raw athleticism. Sky Sports’ coach on the couch, Denis Pugh, even decamped to the swing simulator for a rambling, five-minute presentation on DJ’s status as one of the Tour’s few “natural athletes.”

None of this was entirely unexpected, of course. DJ’s athleticism has become something of a cliché, the motif or theme of countless interviews and features. The trend hasn’t been limited to members of the traveling press corps, either. Ryder Cup captain Davis Love III prefaced his announcement of Johnson as a tournament wildcard last year by confidently declaring the 28-year-old “probably the best athlete on the PGA Tour.”

So familiar are we with the inventory of DJ-related sporting miscellany, mere use of the adjective “athletic” in close coordination with his name is usually enough to prompt a sudden outpouring of half-remembered feats. He can dunk a basketball! He can carry a three-wood 300 yards through the air! He can do this (whatever it is)!

This fixation on DJ’s outlier status, the extent to which he stands apart from his peers as a gifted athlete-savant, is often indulged as a means of underscoring golf’s apparently tenuous status as a professional sport, the slightly pathetic cousin of primetime giants like basketball and American football.

In reality, however, such protests accomplish the opposite. To those who would deride professional golf, the presence on Tour of beefcakes like Dustin Johnson and Gary Woodland doesn’t make a compelling case at all. The fact of their exception tells its own (weedy) story, and we all become Kevin Stadlers by comparison.

At issue here isn’t golf’s worthiness of a place in the locker room, exactly, but our refusal to consider the debate in anything other than the terms established by more popular sports. Players are forever championing the value of rigorous workouts and weight training, running scared of towel snaps from brawnier rivals, but there’s more to athleticism than brute force and cardiovascular stamina.

On some level, perhaps even a deeper, more intuitive one, every member of the PGA Tour is a “natural athlete.” They may not look like quarterbacks or point guards – in part because they don’t have to; their profession doesn’t demand it – but their abilities are no less remarkable.

They are, to a man, geniuses of hand-eye coordination and spatial relations. They wield golf clubs with surgical precision, feeling in the passage of milliseconds the arc of a ball-flight or quality of contact. Though polo shirts and sensible slacks suggest otherwise, the swing of an elite player is a marvel of hyperawareness and athletic efficiency.

Professional golf’s obsession with the practice tee and weight room has done much to perpetuate the myth that excellence can be taught or simply earned through diligence. The range, however, isn’t the place where pros go to learn their trade; it’s where they head in search of marginal gains. Talent, that ability to swing the club at 100 mph and consistently, effortlessly place its face square against the ball, is drawn from an altogether deeper well.

The swings we see on television coverage of the PGA Tour, each one a study of mechanical perfection, are luxuries only granted those who’ve already proven their ability. Pat Perez, for example, made his name as a teenage prodigy with this fishing-rod cast of a golf swing. Padraig Harrington became one of Ireland’s most successful amateurs with an action that wouldn’t look out of place in your Sunday fourball. Each, however, possessed that athletic x-factor, an innate capacity for physical coordination (the same knack, incidentally, that allows Sergio Garcia and Martin Kaymer to juggle soccer balls for minutes at a time).

When it comes to naming and explaining DJ as a “natural athlete,” then, should not the fact of his being a professional golfer count for as much, if not more, than his ability to dunk a basketball? Treating golf as a sport shouldn’t entail afternoons of bench presses and lunges, just the loss of that lingering inferiority complex that leaves us slightly ashamed to place Phil Mickelson in the same bracket as Tom Brady.