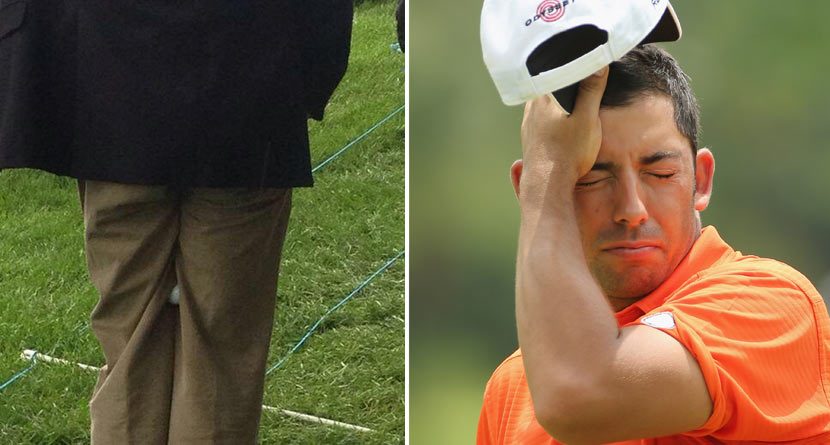 Pablo Larrazabal has made golf headlines for a number of unlikely reasons this year. It started with him taking home the crown at the Abu Dhabi HSBC Golf Championship by beating Rory McIlroy and Phil Mickelson by one stroke.

A few months later, Larrazabal was forced to jump into a water hazard after being attacked by a swarm of hornets, then went on to birdie the hole after making a wardrobe change.

And now this … somehow he got his golf ball lodged between the legs of a spectator. Seriously.

During the first round of the BMW PGA Championship on Thursday, Larrazabal’s approach on the 18th hole somehow found a way to get stuck between a fan’s legs, while he was standing. Larrazabal tweeted a photo of his lie:

Why all the crazy things happen to me? That was my lie for my 3rd shot on 18th… Hehehehe pic.twitter.com/BGsxYRwseB

No, he didn’t actually have to play the ball from that position. Larrazabal took a free drop and went on to make par, closing out his first-round 69.

Had he been playing by “Happy Gilmore” rules, he’d have to “play it as it lies.”