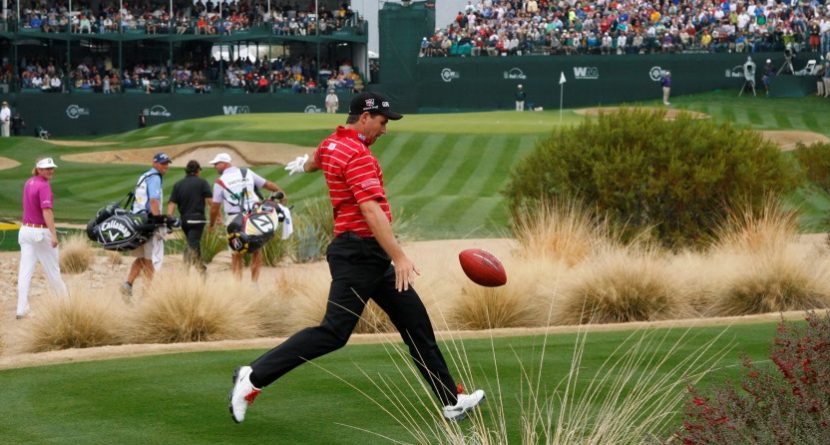 Cheers, boos, singing, dancing and swag are all part of the famous 16th hole at TPC Scottsdale during the Waste Management Phoenix Open. And for the second straight year, so too will be footballs courtesy of Back9Network ambassador Padraig Harrington.

Everyone’s favorite Irishman kicked and punted NFL footballs into the stands last year, and he says he plans to do the same this year.

“Footballs again,” Harrington told the Golf Channel. “We have actually the replica ball from the Super Bowl final. It’s a pretty nice ball if you can catch it.”

And it’s a safer stunt than the one he tried to pull a few weeks ago in Durban, South Africa. He was offered the chance to take a ride on the “Big Rush,” which was named the world’s tallest swing in 2011 by the Guinness Book of World Records. But his wife, Caroline, nixed that idea. She shouldn’t have any problem with him punting, as after doing so last year Paddy finished in a tie for ninth at the Phoenix Open, his best finish of the year on the PGA Tour.

This week’s event again marks Harrington’s Stateside season debut, and it comes after a fifth-place showing at the European Tour’s Volvo Golf Champions event in Durban, and a missed cut at the Abu Dhabi HSBC Golf Championship.