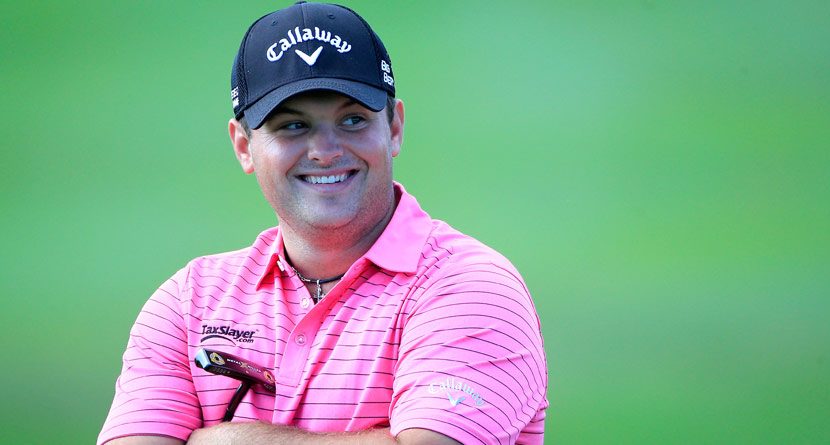 After claiming the third win of his young PGA Tour career, Patrick Reed was not shy, telling the world exactly what he thinks of his game and where he ranks in the world of golf.

In his post-round interview, Reed said, “I don’t see a lot of guys that have done that [winning three times before age 24], besides Tiger Woods, of course, and, you know, the other legends of the game. It’s just one of those things, I believe in myself and – especially with how hard I’ve worked – I’m one of the top five players in the world. I feel like I’ve proven myself.”

As I watched him give his interview, this was all I saw:

Alright. Reed’s comments weren’t that outrageous, but they were full of hubris and sparked a debate that is as old as competition itself: Are you cocky or confident?

Clearly, there is a fine line between cocky and confident and I suppose anyone who has reached the pinnacle of their profession has the right to gloat a little, right? With his win on Sunday, Reed now has three on the PGA Tour at the age of 23. The only player with more by that age is Rory McIlroy, who has six titles, two of them being eight-shot victories in majors. Since 1990, the only other guys to win three times before they were 24 besides Reed and McIlroy? How about Phil Mickelson, Tiger Woods and Sergio Garcia. So maybe Reed does have a point to his grandstanding after all?

It’s not like Reed is the first professional athlete to proclaim their greatness or to walk the delicate line between cocky and confident.

Of course, there’s Muhammad Ali, who proclaimed he was the “King of the World” and that he was “the greatest.”

Then there’s Dale Earnhardt, the NASCAR legend and seven-time series champ who liked to wear this T-shirt under his firesuit just in case his competition forgot about his abilities on the track:

I love @kylebusch. Sometimes he reminds me of another fellow. pic.twitter.com/nmeYvKiYlc

And who could forget Broadway Joe Namath promising a Jets win in Super Bowl III and delivering? Guaranteeing victory isn’t something a person lacking confidence would do, now would they?

Obviously, there are numerous examples throughout sports. Be it words and T-shirts or bat flips after home runs, dances after sacks or muscle flexes and stare-downs after slam dunks, the cocky/confident argument is everywhere. Some people like it, others don’t. But in the world of golf, where confidence and mental fortitude are must-haves for champion golfers, it’s possible that Reed’s hubris is part of what makes him so good — because no one is debating that.

For me, there are two parts to Reed’s comments. First off, “I don’t see a lot of guys that have done that besides Tiger Woods and the legends of the game” didn’t sit well with me. Sure, these guys are legends of the game now, 50 wins, 60 wins, 80 wins into their careers. But they weren’t when they were 23 and, except for Tiger, none of those guys were being compared to (or comparing themselves to) Jack Nicklaus, Arnold Palmer and Gary Player. Everyone knows three wins before the age of 24 is impressive; we don’t need you to jump up and down and demand that you’re paid attention to or make sure we know what you’ve accomplished. On the other hand, Reed makes a valid argument for being a top-five player in the world. Much like the mystery that is QBR in the NFL, in golf everyone wonders how the Official World Golf Rankings are calculated. It’s really not that confusing, but hey, two guys who’ve never won a major have spent time at world No. 1, so who knows? Everyone’s definition of No. 1 can be different. Reed’s three wins in seven months have vaulted him to 20th in the world rankings and third in this year’s FedExCup standings, neither of which are too shabby, and no one (save Jimmy Walker) has played so well on such a consistent basis lately.

At the end of the day, I’m fine with confident. Judging by his emulation of Tiger’s Sunday get-up, Reed plans on winning more than three events in his career and you have to be confident to play with the best. What I’m not OK with is someone telling me how to feel about them and assigning themselves some standing. History will be the judge, and as Proverbs 16:18 reminds us, “Pride goes before destruction, and a haughty spirit before stumbling.”

But hey, good luck to ya, kid.