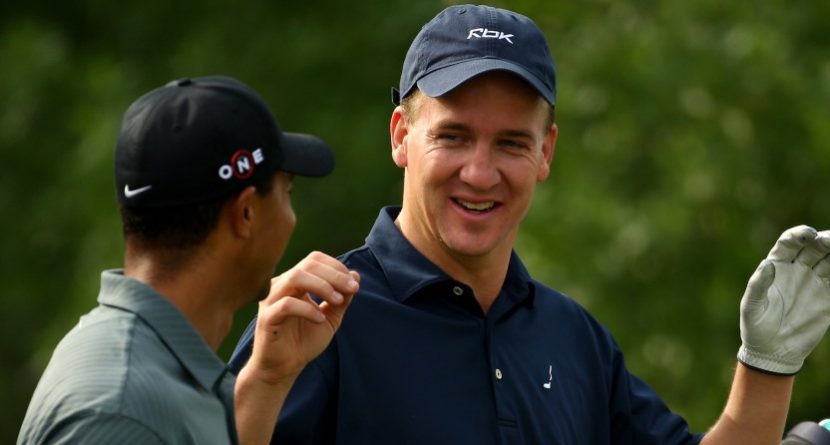 The No. 1 golfer in the world wasn’t at Bay Hill over the weekend for the Arnold Palmer Invitational, but the No. 1 quarterback in the world was. Noted golf enthusiast Peyton Manning took in the action in Orlando, and sat down with the Golf Channel for a (not surprising) humorous interview.

Manning was, of course, asked about golf and specifically his jaunt to Pebble Beach for the AT&T National Pro-Am just days after the Denver Broncos’ crushing loss to Seattle in the Super Bowl. While there, he partnered with 24-year-old Scott Langley, who placed a season-best third last week at the Valspar Championship. Naturally, Manning took credit.

“I saw a couple things in his swing that I kind of tinkered with and I thought that served him well,” Manning joked. That was Manning’s second Pebble Beach Pro-Am, as he teamed up with Webb Simpson in 2009. “Same thing – I got a couple things in his short game fixed and next thing you know, he’s winning U.S. Opens.

“I think it’s been a productive tournament for the guys that I’ve played with, so look for Langley to be winning majors here pretty soon.”

But the best part of the interview comes at the end, where Manning tells a Tiger Woods story that you would only believe if it came from Peyton Manning. The sporting legends have played golf for fun together nearly every March for years. So when Manning was with the Indianapolis Colts, he decided to use the world golf rankings to indicate snap counts. Woods was ranked No. 1, so “Tiger” called for the snap on one; Phil Mickelson was ranked No. 2, so “Phil” meant for the ball to be snapped on two.

However, when Manning and Woods met up last year after Manning’s first season with the Broncos, Woods asked him about the difference between the Colts offense and the Broncos offense. Manning’s sly response: “The hardest thing for me right now is that McIlroy is on ‘one’ and Tiger is on ‘two.’ It hit him in the gut pretty hard. You know, because he likes to give it out more than anybody, and it hit him hard.

There was no mention of whether or not Manning and Woods will play golf this March, but considering Woods’ back issues kept him out of the Arnold Palmer Invitational and the Masters is a little more than two weeks away, let’s hope he’s getting that back fixed.

This may be Manning’s NFL offseason, but that means it’s his prime golf season. Although, if he’s looking to improve his golf game, last year will be tough to top – he carded a 77 at Augusta National, sank a hole-in-one at Castle Pines, and teamed with Tom Brady for a clutch win over some businessmen.