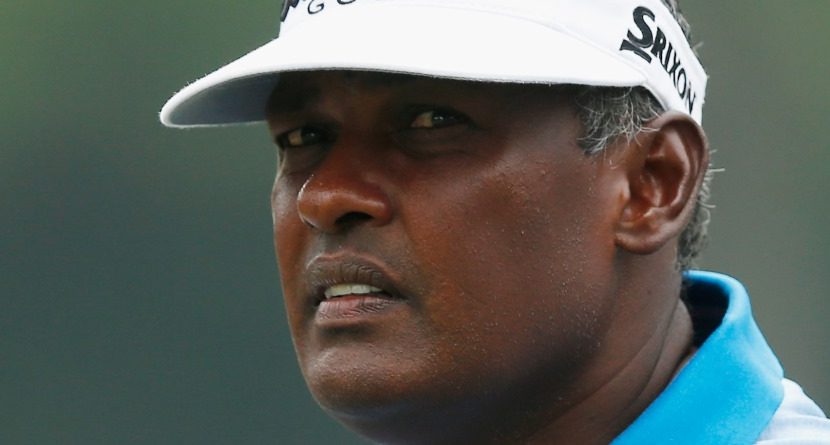 Let me ask you a question.

When you were younger and didn’t get your way, or if someone in gym class started a nasty rumor about you, did you go home and cry to Mommy and Daddy? Better yet, when you admitted to breaking a rule, did you spend the next few months moping around before seeking revenge on those who punished you?

No? Not so much? Then you probably handle stressful situations better than Vijay Singh.

According to Bloomberg’s Chris Dolmetsch, the PGA Tour has asked a New York state court to throw out the (ridiculous) lawsuit filed by Singh on May 8, in which the former world No. 1 accused the Tour of “reckless administration and implementation” of its anti-doping program. There’s so many things wrong with Singh’s lawsuit that I don’t even know where to begin.

First of all, Singh admitted to breaking a rule, whether he intentionally did so or not. The PGA Tour responded by allowing Singh to continue playing golf tournaments – and getting paid, mind you – while they investigated Singh’s use of IGF-1, a substance commonly found in deer antler spray. After doing their due diligence and conferring with the World Anti-Doping Agency (WADA), the PGA Tour and WADA agreed that the product Singh used did not contain enough IGF-1 to constitute a ban. Rumor has it that Singh was punished akin to a slap on the wrist without any public announcement.

Essentially, Singh got off scot-free. He could have kept his head down, his eyes forward and continued to play golf as usual.

But no, Singh wasn’t satisfied. He heard all those meanies in tournament galleries shouting rude things. He was called a cheater. He was called a criminal. He probably heard things similar to what he heard in 1985 when he literally cheated on his scorecard while playing on what would become the Asian Tour.

The problem with Singh’s argument in this latest situation is that he is refusing to take responsibility for his own actions. He admitted to breaking a rule and is now butt-hurt about the consequences that followed. Worst of all, Singh’s lawsuit – should it hold up in court – will hurt his fellow competitors in a number of different ways, least of which being the establishment of an excessively punitive anti-drug policy.

Let’s all be sure to send a big ‘Thank You’ to Vijay Singh when PGA Tour players aren’t allowed to use tobacco, take aspirin or drink caffeine.