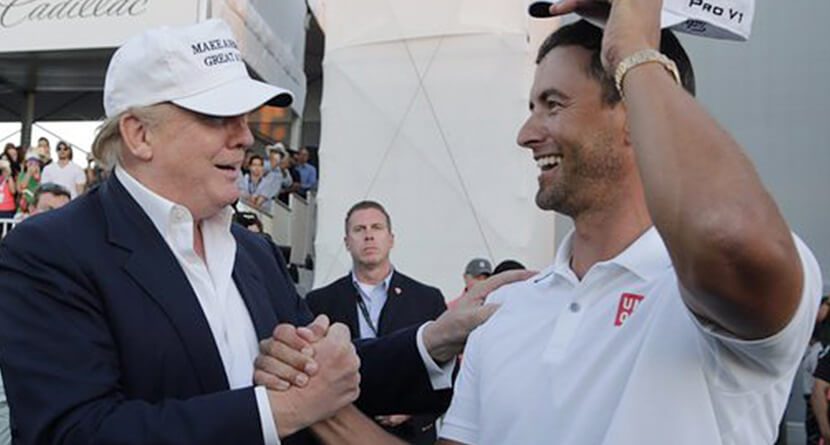 Golf news broke, of all places, on Fox News Tuesday night: the PGA Tour would be moving the event formerly known as the WGC Cadillac Championship to Mexico City.

While most of the golf world recovered from Memorial Day weekend and Jordan Spieth’s return to the winner’s circle, presumptive Republican presidential nominee Donald Trump joined Sean Hannity where he dropped some big-time PGA Tour news in the midst of one of his answers.

Also buried in this around Trump/Hannity & kidnapping in Mexico – Trump on NJ: “I love New Jersey. I am New Jersey.” pic.twitter.com/AvFt06iRQB


Trump’s comments picked up steam over the next few hours and by Wednesday morning, the wheels were in motion to make an official announcement of the Tour’s plans, which would accompany Commissioner Tim Finchem meeting with the press at the Memorial Tournament.

Trump seemed none too pleased with the move, releasing a statement admonishing the Tour and calling the move “a sad day… for the game of golf.”

It is a sad day for Miami, the United States and the game of golf, to have the PGA Tour consider moving the World Golf Championships, which has been hosted in Miami for the last 55 years, to Mexico. No different than Nabisco, Carrier and so many other American companies, the PGA Tour has put profit ahead of thousands of American jobs, millions of dollars in revenue for local communities and charities and the enjoyment of hundreds of thousands of fans who make the tournament an annual tradition.

The move to leave Trump National Doral, which was in the midst of a 10-year contract with the Tour, was made possible by Cadillac dropping out as the title sponsor of the event. The Tour had an out in the contract that said they could move locales if a title sponsor could not be obtained.

Here’s what the Commissioner had to say, via his interview transcript:

We issued a statement today about our plan as it relates to the World Golf Championship played the last few years at Doral and now moving to Mexico City starting next year.

As we anticipated, some of the reaction revolves around the feeling that somehow this is a political exercise, and it is not that in any way, shape, or form. It is fundamentally a sponsorship issue. We are a conservative organization. We value dollars for our players. We have a strong sense of fiduciary responsibility. So we make decisions that are in the best interests of our players, short term and long term. And as a consequence, we pride ourselves on being a conservative organization.

The decision made here was based on the reality that we were not able to secure sponsorship for next year’s WGC at Doral or for out years for that matter. At the same time, we had an opportunity to build what we think is going to be a spectacular event in an area that is strategically important to the growth of the sport and the activity of the PGA Tour that has been focused in South America and Central America for the last good number of years.

Donald Trump is a brand, a big brand, and when you’re asking a company to invest millions of dollars in branding a tournament and they’re going to share that brand with the host, it’s a difficult conversation.

Grupo Salinas, a conglomerate media and retail company, will be the new presenting sponsor and Golf Channel reports that the 2017 event will be held at Club de Golf Chapultapec, although no official site has been named.